Skilled with a crossbow

Stalking and tormenting his victims.

"Have fun" with Maddie before killing her (failed).

The Man is the main antagonist of the 2016 horror film Hush. He is a sadistic killer who enjoys playing "cat and mouse" games with his victims.

He was portrayed by John Gallagher Jr..

Not much is known about the man other than that he may be a hunter-evident by his skills with the crossbow. Prior to the events of the film, he had killed at least 12 other people and carved each of their numbers on his crossbow in notches. He begins stalking Maddie's friend and neighbor Sarah, as she leaves the former's house, attacks her and shoots an arrow in her once she bangs on Maddie's door for help. He then stabs her to death outside and is amazed to discover that Maddie is a deaf woman, seeing her as "easy prey". After murdering Sarah, he torments Maddie by sending her pictures of herself walking through the house with her phone he stole. Maddie finally sees the man outside and quickly closes the door, but is again tormented by him. Maddie tries to contact the police, but he cuts the power and sabotages the car to isolate her.

Maddie then writes on the door, saying that she won't tell anyone because she hadn't seen his face and that her boyfriend is coming. He sees this message and removes his mask as response-also telling her that he is aware she lives alone. Afterwards, Maddie attempts to hide in her room, but is taunted by the man, who uses Sarah's lifeless body to tap on the window. The man finally attempts to invade the house by opening the bedroom window, but is stopped by Maddie, who plunges a hammer into his arm. Eventually, Maddie tries to escape and is shot in the leg by the man with a crossbow, but also manages to steal his weapon.

Sarah's boyfriend, John, arrives at the house looking for Sarah and finds Maddie's message. The man then confronts John, pretending that he is a police officer sent on a dispatch call to Maddie's residence. The man then pretends to call for backup on John's phone but John does not fall for it and attempts to attack the man from behind with a rock. Before he can, Maddie sees him and bangs on the window to get his attention, which allows the man to stab him in the neck. With the last of his strength, he puts the man in a chockhold until he dies, buying Maddie time. After John dies, the man talks with his body and sees Maddie's cat, planning to use the pet to torture Maddie even more by nailing it to the front door. As he talks to the cat, Maddie then loads the crossbow and shoots the man, but it only hits his shoulder and makes him angry.

While running back inside and threatens to enter the house, but is taunted back by her, who writes on the door once again, but this time in her blood saying "Do it, coward". Maddie hides in the bathroom and waits for the man to open the door, but he enters the bathroom through the ceiling and attempts to stab Maddie in the back, but she feels his breath and stabs him in the leg. Stumbling to the kitchen, Maddie takes advantage of her own deafness to use it against him, by spraying insecticide in his eyes and using a smoke alarm to deafen him. Unfortunately, the man regains the upper hand by strangling her. Before he can finish, Maddie manages to stab him in the throat with a corkscrew, killing him.

The Man was as much of a killer as he was a psychological abuser. He took delight in tormenting Maddie with the idea that he was going to wait until she wanted to die before he killed her, and even taunted her with the body of her dead friend, Sarah, through a window.

Despite being a remorseless killer who enjoys causing pain, the man was shown to have some cowardly attitudes during the film, such as targeting a deaf woman to be his next victim and being genuinely afraid of fighting John, even going as far as to thank Maddie for distracting him.

The man stabbing Sarah to death. 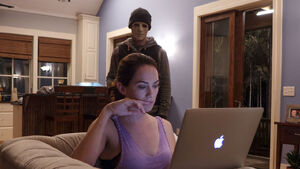 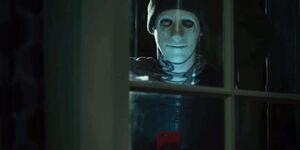 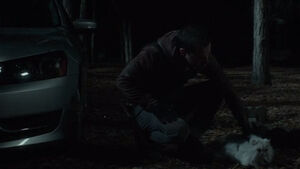 Maddie challenges the man to break in and fight.

The man speaks to Maddie before trying to kill her.

Maddie stabs the man in the throat.