Villains Wiki
Register
Don't have an account?
Sign In
Advertisement
in: Evil from the Past, Male, Creepypasta Villains,
and 20 more

The Man in the Fields

The Man in the Fields

Watching his victims from just outside their own house.

Ensure his victims complete the ritual without looking at him. If they don't, his goal is then to violently kill them.

The Man in the Fields is an ancient Pagan deity who has successes coming from rural areas because he prefers to be alone when he is summoned, just himself and the victim.

The Man in the Fields is a very sadistic creature; but to those who have completed the ritual without looking at him, he rewards them beneficially.

The Man in the Fields, unlike other Pagan deities, does treat his devoted servants with respect. He knows his value; he has been summoned because he can reward his summoners.

The Man in the Fields has to be summoned by going out into an open backyard at any time of the night (although financial status comes from starting at two in the morning) and whispering seven times "Who will scare the crows away?" At the last whisper, a mocking voice will say "That's not your biggest problem."

Then the practitioner has to return to their house, whereupon everything that can open will have opened. They must find a room, put a crucifix inside, and lock the door, for protection.

Throughout the ritual, as they lock each door that is opened, they will see an eerie man dressed in farmers overalls with a deathly complexion to his face. He is not the Man, he is a herald. He is just making sure the summoner is fulfilling the ritual's rules.

The trick is to lock every open item in the house in precisely an hour because then they will be rewarded. AT NO POINT can the practitioner look down into their yard, because they will see the above image, the Elongated Man in the Fields, staring up at them.

If they see the deity, he will see them, and begin racing off his post, into their house, and kill them - or, if they lock themselves in the safe room, they will endure his screams and clawings til morning. But even so, they will not get rewarded, because they looked at him. 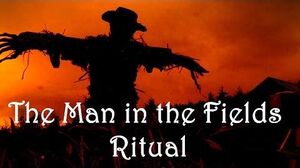 The Man in the Fields Ritual Creepypasta