The Man in the Red Room

The Thing in the Red Space
The Fungal Person

Hanging from the ceiling.

The Man in the Red Room, also known as the Thing in the Red Space, is a monster made by Trevor Henderson. As the name implies, it's trapped in a red space/room.

The Man in the Red Room has first appeared on a post made by Trevor Henderson. Whoever is the narrator says that he again had the dream about “the red space”, tucked away in a part of an unknown city, in the back of a warehouse. He sees what's been left in there and knows why it can never be let out, hinting that the creature is a villain. Then, he wakes up, knowing it's all true. The picture shows the Man in his titular red room. It appears to be some thin monstrosity that is hanging upside-down from the ceiling. It has many holes in its body and its head is oriented right-side up, with a small piece of its body floating beneath its head to act as some sort of jaw. Interestingly it appears that the creature’s hands and feet are in the ceiling, as they are not visible in the image, implying that he can pass through walls. The caption implies that the Man in the Red Room is somehow imprisoned there.

The second time it has appeared was when an unknown number of people had to sit inside a bus and listen to the Man crawling along the outside of a bus. One person says "it was nothing if not patient," suggesting that the Man may have been waiting for the humans to exit the vehicle so that it could possibly do something horrible to them. The picture shows the Man looking through the bus window. 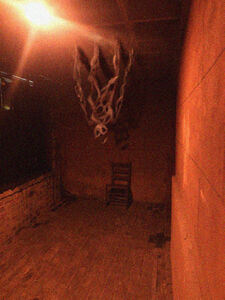 The Man in his titular Red Room.
Add a photo to this gallery

Retrieved from "https://villains.fandom.com/wiki/The_Man_in_the_Red_Room?oldid=3767042"
Community content is available under CC-BY-SA unless otherwise noted.