The Demon
The Beast in the Machine
God of All Machines

The Mangler is a demonically possessed machine fueled by bloodlust that serves as the titular primary antagonist of the 1978 short story The Mangler by Stephen King, and also of the story's 1995 film adaptation of the same name and its second and final sequel The Mangler Reborn.

The actual Mangler itself does not appear in The Mangler 2, which starred Lance Henrickson of Pumpkinhead fame. The Mangler here is replaced by a malicious and rogue computer virus with a similar bloodlust. The Mangler 2 is almost unanimously regarded by fans as the worst film in the series.

A police detective investigating a sudden rash of grisly deaths caused by an industrial laundry press machine discovers that, through a series of unfortunate coincidences, the machine has become possessed by a demon. The story ends after the detective and his friend underestimate the demon's power and in seeking to exorcise the machine, they instead goad it into ripping free of its moorings and prowling the streets in search of fresh prey.

The Mangler, a large laundry folding machine in Gartley's Blue Ribbon Laundry service within the the town of Riker's Valley, Maine, is owned by Bill Gartley. The trouble starts when Gartley's niece, Sherry, cuts herself on a lever connected to the machine and splashes blood on the Mangler's tread, while also trying to avoid being crushed by an old ice box some movers are clumsily carrying past. Sparks and light streams occur when both the blood and the ice box come into close contact with the Mangler. Later, an elderly worker named Mrs. Adelle Frawley, struggling to open a bottle of antacids, spills them on the moving tread of the Mangler. When she attempts to collect them, the safety shield inexplicably lifts up and traps her hand inside, followed by her entire body getting pulled into the machine.

Police officer John Hunton, with the help of his brother-in-law, Mark, investigates the incident and the ones that soon follow. As the plot progresses, Mark tries to convince Hunton that the machine may be possessed, and the only way to stop the deaths is to exorcise the machine to dispel whatever demon is inhabiting it. They also discovered the machine itself has ties to the town. It's revealed in photographer JJJ Pictureman's old journal with news paper clippings & pcitures that each of of the girls including Bill Gartley's late daughter Maryanne, all at the age of 16 and daughters of all wealthy and powerful people in Rikers Vallery, all each died on their 16th birthdays (some fallen into the Mangler by "accident", others sercretly kidnapped and murdered) and all of these deaths are connected to the Mangler itself.

With the help of Sherry after being rescued by them from letting her twisted uncle and his accomplice Lin Sue that were both about to sacrifice her to the Mangler, the two men attempt to exorcise the demon before it strikes again by reciting a prayer and administering holy water. The machine gives one last groan and shuts down. As they three sigh with relief, Hunton takes some antacids, admitting to Mark that they belonged to the deceased Mrs. Frawley. Mark suddenly realizes that the key ingredient in the antacids is deadly nightshade, also called "the Hand of Glory" as outlined in his occult book. Since the machine was accidentally fed the same antacids, Mark realizes that not only was the exorcism rendered useless, as the demon is still alive, it is now stronger than ever. The machine bursts to life and now appears to have a mind of its own, shedding off pieces of metal and rising up in the manner of a wild beast. The three run through the warehouse as they are chased by the now-mobile Mangler.

The Mangler kills Mark while John and Sherry descend a flight of stairs. In their hurry to escape, they fall through a large manhole into the sewer below, the machine struggling to get to them. Suddenly, something falls from the machine into the water, and a mechanical wail ensues. The machine draws back and becomes still before being destroyed.

After the horrifying night with the possessed Mangler machine was over, Hunton helps Sherry out of the sewer and gets to her to hospital. The doctor informs him that she'll be alright but he'll have to wait until tomorrow to see her. As Hunton leaves, the doctor waves goodbye, and Hunton notices that he's missing the ring finger on his right hand. When he gets home, Hunton finds a letter from JJJ Pictureman warning him not to trust people in Riker's Valley with missing body parts. There's a piece of each of them in the demon, and a dose of the demon in each of them, he writes. Hunton later pays a visit to Sherry at the laundry factory and finds it fully operational with the mangler back in place. From the scaffold, Sherry can be seen walking with crutches and yelling unpleasantly at the workers. She notices Hunton and waves at him, revealing the missing ring finger on her right hand. Hunton drops the flowers he was carrying for her into the waste can and leaves the factory.

Over a decade later, the same possessed machine dubbed "The Mangler" is bought by a repairman named Hadley Watson. Hadley gradually becomes obsessed with the machine and, after awakening it with his blood and being "eaten" by it, is forced to feed it new blood to stop his corpse from rotting.

When his last victim, his daughter named Lious, was struggling with him to push into the machine, the deformed Hadley said the last words "I am the machine!" before he drags both of themselves into the choomping claws of the Mangler.

Later, the possessed Hadley survived and began searching for new victims to feed the Mangler with blood. 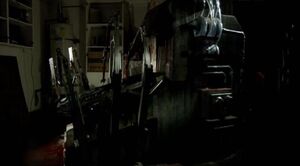 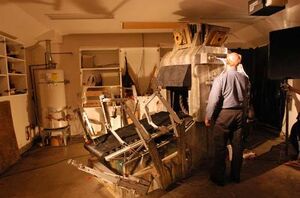 The Mangler returns.
Add a photo to this gallery

Retrieved from "https://villains.fandom.com/wiki/The_Mangler?oldid=3974352"
Community content is available under CC-BY-SA unless otherwise noted.