His human form was that of a college dean named Rektor Bradeen who is portrayed by veteran actor Lance Henriksen.

The Mangler virus was programmed to 'serve' the person who downloaded by simply killing all those who hurt him or her. There is a warning: once the Mangler Virus is released into the system and began its systematic killing spree, there is no stopping it. not even the person who downloaded it into the system and becomes an accomplice in the super virus' bloody rampage.

The Mangler Virus in 'his' digital form appears as a bald disembodied blue head of a man with a cruel smile.

When the virus possessed the college's headmaster Rektor Bradeen, he has taken a human form well suited to his needs, wearing an all black tuxedo-like suit and black sunglasses and with wires being planted into his head, giving it a horrific appearance.

Troubled and wealthy student Joanne "Jo" Newton who was a girl desperate for attention from her workaholic father and ended up with her going to an upper class private boarding school after a break in at her dad's computer company, inadvertently loads in a secret and deadly experimental computer virus — Mangler 2.0 - into the mainframe of her college's new high-tech system. Soon, the school's security system has the ability to turn washing machines into deadly weapons, wires in the school's electronics and walls into slithering, serpentine traps, and no one is safe, not even innocent coeds and faculty staff members as everyone becomes a prey. But what nobody knows is that this virus literally has a mind of its own, and it controls everything around the school. At first, everybody thinks it would be a blessing, but when the virus starts killing everyone in sight, the remaining students and staff attempt to escape from the building, which proves very difficult, as the virus is watching their every move.

Worst of all, the school's headmaster Bradeen has unfortunately been taken by the virus,in fact, it infected his very body—with wires being planted into his head. The virus controls his movements, and turns him into a walking computer. With Bradeen at the virus' bidding, he is forced to go after the students.

Jo then finally confronted the monster she unleashed down in the school's basement as the Mangler Virus has taken Dean Bradeen's body.

After she tricked him by showing a nonviolent program on creating new lives featuring snowflakes, she stabbed him and pushed him against the supercomputor he no longer controls. The virus himself was destroyed in the process as his human form dies. Jo ended the carnage and escaped with her bodygaurd Paul, the chef, and her father.

Jo later went on a Spring Break in Europe. She was a call from her father. After her phone call ends, a strange and familiar message appeared on the screen of Jo's cellphone saying "you've been mangled", which indicates that the Mangler Virus might be alive. 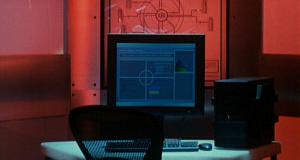 The N2-K supercomputer system has corrupted and taken over by the Mangler Virus.
Add a photo to this gallery

Retrieved from "https://villains.fandom.com/wiki/The_Mangler_Virus?oldid=3408659"
Community content is available under CC-BY-SA unless otherwise noted.