The Master (Classic Who)

NOTE: The article details The Master as depicted from "Classic Doctor Who" - which ran from 1963 to 1989; 1996, for information on The Master from the Revival Era of Doctor Who (2005 to present) see here

Torment the Doctor.
Killing those inferior to him.
Make the Doctor suffer.
Steal the Doctor's remaining regenerations.
Take over the universe.

The Master is the main antagonist in the Classic BBC science fiction series Doctor Who.

He was an immortality seeking renegade Time Lord who was continuously searching for new ways to survive and prolong his own life, all the while on a never-ending quest to conquer the entire universe and kill his archenemy and former best friend The Doctor.

He appears as the main antagonist of seasons eight, nine, eighteen, nineteen and the 1996 film Doctor Who: The Movie. He also appeared as the secondary antagonist of season ten, the 20th anniversary special "The Five Doctors" and season twenty-three.

The early incarnation of the Master was self-centred and arrogant, willing to manipulate a whole civilisation to aid himself, even being somewhat amused by it. This Master was somewhat calmer than his later selves, preferring to hypnotise rather than directly manipulate others. As well as this, he prefers to use others to kill, and only when he feels it necessary, rather than any sadistic glee. He looked down on humanity, seeing it as primitive.

The Master presented himself as a suave, debonair gentleman, with a sardonic sense of humour. However, his true nature was arrogant, and impatient, with no time for fools. The Master was willing to play the long game, spinning a web of lies while maintaining several back-ups in his schemes. The Master held himself in high-esteem, having full confidence in his abilities. The Master would casually murder those whom he could not control, or who were standing in his way. He claimed that those who died as a result of him were "necessary sacrifice[s]". The Master occasionally showed a more brutal side to him, when he killed a scientist by throwing him off a radio telescope, or running over reformed prisoner Barnham.

Given his haughty nature, he regarded most beings as his inferiors, but had a mutual respect for the Doctor as a worthy opponent and his near intellectual equal, and even showed a certain respect to the Doctor's companions, even if he still considered them inferior. He would only resort to killing the Doctor if he viewed him as an unmovable obstacle in his plans, considering his quarrel with the Doctor to be something of a game. The Master was not above working alongside the Doctor when necessary, and even offered to rule the universe with him. He seemed to believe his delusions of grandeur, proclaiming that he and the Doctor could "reign benevolently," over the universe and that, instead of democracy, the world needed "strength, power and decision."

Underneath his suave exterior, this Master had a somewhat childish side to him, revelling in sarcasm, watching children's TV, showing a sense of irony. He also had a sadistic side, taking particular pleasure in goading the Brigadier into attacking Axos when they both knew that it would put the Doctor and Jo in danger. He also took considerable delight in blackmailing the Doctor and Jo. Unlike his following incarnations, this Master was a gracious loser, though he once stated that destroying the Doctor's favourite species would "be a reward in itself".

The decayed Master was easily characterised by his sheer desperation and dwindling sanity during his attempts to extend his life. In spite of this however his intellect was as keen as ever, with him making up for his damaged body by manipulating from the shadows until the right moment. The Decayed Master felt a stronger hatred towards the Doctor than before, and showed a cold and vengeful side to his personality, often killing for the sake of it. . Preoccupied with his desire to extend his life, the Master is at his most selfish, willing destroy his own civilisation for the sake of his survival. The Master was also stubborn, dismissing the Doctor when he warned him that the Sash that was supposed to protect him from the Eye was damaged. The Master freely considered himself evil, but rejected being considered insane.

The Tremas Master was a flamboyant, ruthless and psychopathic man who always bore a smug or sadistic grin upon his face and revelled in the suffering of others. He had the sharp intellect and wit of his previous selves and a cool and collected demeanour which he rarely shifted from. In spite of this however his ego would often get in the way of his own plans and sabotage them. After being infected with the Cheetah Virus The Master showed a much more animalistic side to him, with his sadistic streak growing even larger than it was before.

Bruce's Master lacked the charisma of his previous selves, being a much more feral and volatile figure than before although still with his keen intellect and manipulative ways. This Master also had a very short temper and retained the sadism and coldness of the Tremas incarnation.

The Victor Magister incarnation of The Master had the appearance of a handsome, slim, fair skinned man in his late 40s with very sharp facial features, brown eyes and a large pointed nose. His most defining feature would perhaps be that of his slicked back, receding brown hair and matching goatee, a trait that many of his successors would adopt for themselves.

This incarnation regularly wore a navy blue Nehru jacket with matching trousers, a white tunic underneath his jacket and black leather gloves with matching shoes. Occasionally he adopted business suits as part of his regular attire instead however.

The decayed Master resembled nothing more than a charred, walking skeleton. With all of his skin burned completely off leaving behind the burnt remains of his flesh and skeleton with his bulging eyes and exposed teeth being particularly prominent. To hide this image the decayed Master was regularly seen in a tattered long, black, hooded cloak which covered his entire body. After being partially healed by the Eye of Harmony, the Master's injuries appeared less severe, with his skin looking badly burned rather than rotting, and his brown eyes being more human.

The Tremas incarnation of The Master was a handsome, tall, pale man with a thick head of short chocolate brown hair that was neatly slicked back and he sported a black goatee. After being infected with the Cheetah Virus The Master developed a prominent pair of fangs and his eyes turned a deep shade of orange and became cat-like.

For the majority of his appearances he wore the clothes the original Tremas was in prior to having his body stolen; a velvet Trakken style suit which consisted of black trousers, a shirt and a black, high collared tailcoat, he also added black boots and occasionally gloves to this outfit. While in The Death Zone he also added a black high collared cape to this outfit.

While using Kamelion and taking the form of Peri Brown's father The Master reverted back to his usual self however wore instead of his usual clothes a black business suit with a white shirt underneath. In "Survival" The Master adopted an entirely new wardrobe, wearing a vintage black belted, pinstripe suit with a silver waistcoat, white shirt and black ascot as well as standard black shoes.

Bruce's Master resembled that of a tall, handsome man with fair skin who had short black hair and brown eyes, however unlike with Tremas the body of Bruce failed The Master rather quickly, making his body decay rapidly upon The Master taking it over with his mouth regularly salivating and his fingernails quickly falling off. The Master's eyes in this form also appeared as very animalistic and sickly, forcing him to always cover them up with sunglasses so the remain inconspicuous.

This Master started off wearing a long black, leather trench coat with a casual suit underneath and black leather gloves however when preparing to steal The Doctor's remaining regenerations he switched to traditional regal Gallifrey robes. 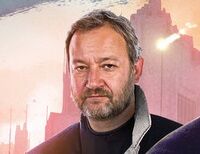 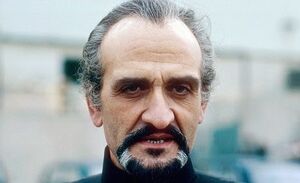 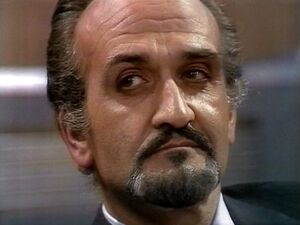 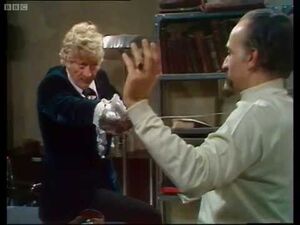 The Master with the Third Doctor 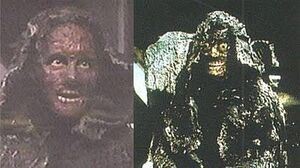 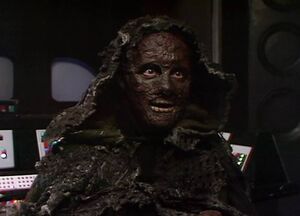 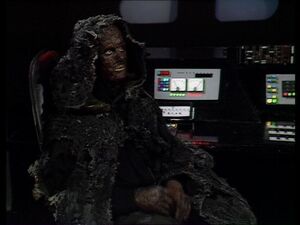 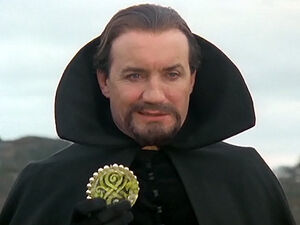 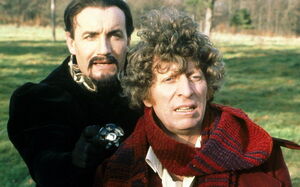 The Master with The Fourth Doctor 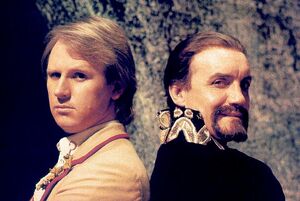 The Master with the 5th Doctor 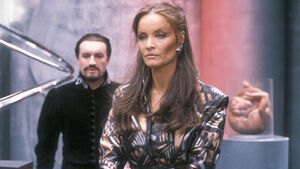 The Master with The Rani 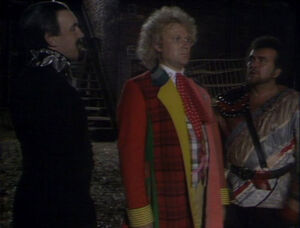 The Master and the 6th Doctor 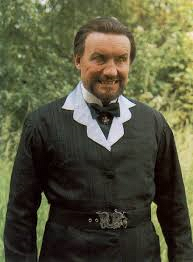 The Master plagued with the cheetah virus 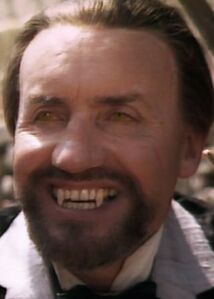 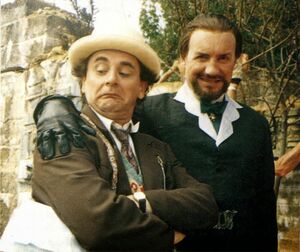 The Master and The Seventh Doctor 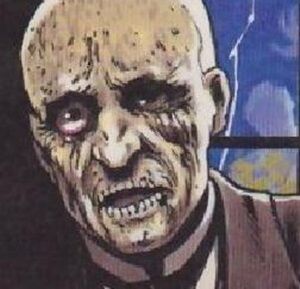 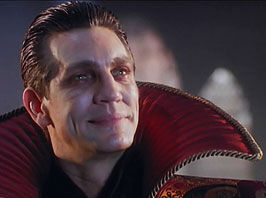 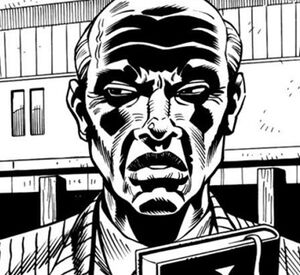 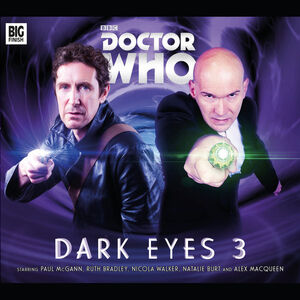 The Master and the Eighth Doctor 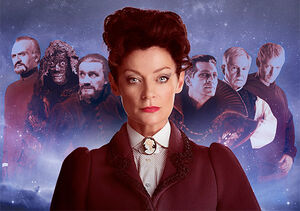 Many incarnations of The Master 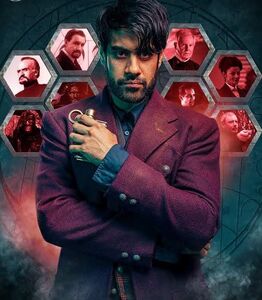 Every incarnation of The Master 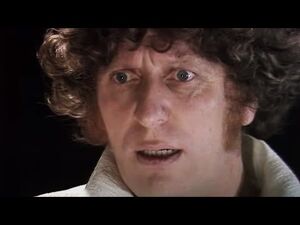 Who is the Master? - The Deadly Assassin - Doctor Who 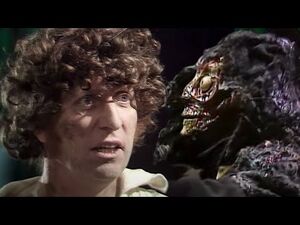 The Master vs the Doctor - The Deadly Assassin - Doctor Who 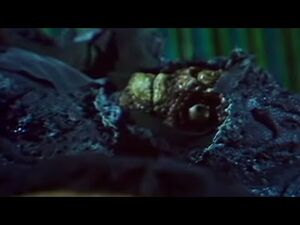 The Master Plays Dead - The Deadly Assassin - Doctor Who 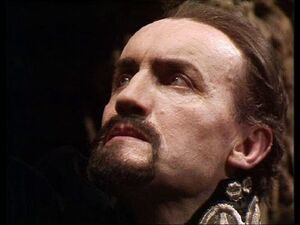