This page is solely for the "Harold Saxon" incarnation of the Master. For the other incarnations of the revival Master, see here: The Master (Modern Who).

Murdering others for the fun of it.
Abusing his wife and servants.
Causing chaos.

Become Prime Minister, bring forth the Toclafane and rule the Earth (succeeded).

Wage war against and conquer the universe.
Kill Martha Jones.
Devour all humans.
Destroy the Doctor (all failed).
Have his revenge on Rassilon (succeeded).

He is known for being unique amongst other incarnations of The Master due to his genuine hatred and disgust of The Doctor where other incarnations can at least tolerate or enjoy his presence for fun. He is also one of the most unhinged incarnations to date, likely due to the "never-ending drumbeat" he hears in his head.

He was portrayed by John Simm.

Unlike other incarnations in the Revival Series, the "Harold Saxon" Master is an unfathomably cruel, selfish psychopath with no redeeming qualities. After successfully conquering Earth, the Master orders the population to be decimated for no other reason than to satisfy his own violent impulses.

He was extremely vain and narcissistic, with the Tenth Doctor noting that he would never destroy himself, even if he could destroy the Earth with him. During the Year That Never Was, he had monuments of himself built all over Earth, and, according to Martha Jones, had even sculptured himself onto Mount Rushmore. He also used the Immortality Gate to turn the human race into duplicates of himself, which he dubbed the "Master Race", and also threatened to do the same to the Time Lords, even asserting that Rassilon "[would] [look] better as [him]."

"Harold Saxon"'s vanity was so vast that when the Tenth Doctor forgave him for his actions, the Master collapsed and wept out of shame. After he expressed revulsion at being "kept" by the Doctor, the Master was shot by Lucy and decided not to regenerate and die to spite the Doctor. He even killed Missy, his future incarnation, when she decided to help the Twelfth Doctor.

Physically human, the Master aged over time, growing from childhood into adulthood and eventually even old age. He was given the name "Yana" by his peers, and due to his great intellect, he quickly assumed a leadership role among them, with many counting on him being able to save the last vestiges of mankind from the end of the universe which was quickly closing in. As a person, Yana had problems with keeping time and was always late to appointments, and he was haunted by memories that didn't seem to belong to him and a strange drumming sound that only appeared into exist in his own head.

When the Tenth Doctor and his companions Martha Jones and Captain Jack Harkness arrived, he tells them about the end of the universe and his plans. Joining him in his laboratory to support him repairing his rocket, they accidentally caused Professor Yana to recall his Time Lord essence and become the Master once more, although they were actually trying to help him to reach Utopia. Mortally wounded when his companion Chantho shoots him with a gun after he fatally injured her with an electric cable, the Master regenerates into a new younger incarnation.

The Master steals the Doctor's TARDIS, which he later even converts into a "Paradox Machine". But as the Doctor sabotages the TARDIS using his sonic screwdriver so he can only able to travel between Earth 2007 and the year 100 trillion, the Master assumes the identity Harold Saxon and makes his way to becoming England's Minister of Defence and later, Prime Minister.

As Harold Saxon, the Master secretly interfered with the Doctor and Martha's lives, for example, through the scientist Richard Lazarus, who made himself younger and mutated into a monster. From there, the Master uses the Doctor's TARDIS to recruit the Toclafane from Utopia, where they emerged from the last humans, as allies, having them kill one tenth of the world population. From that day onward, the Master rules Earth for a year, while turning whole nations into work-camps and bases for an enormous fleet of war rockets, planning a campaign to conquer the rest of the universe and establish a New Time Lord Empire. He holds the Doctor, aged by Lazarus' invention concentrated into a laser screwdriver, and Captain Jack captive, while only Martha is able to escape.

However, the Doctor reverses the events by the help of Martha, with the Master being shot by his wife Lucy Saxon and refusing to regenerate as his death is a small victory to emotionally hurt the Doctor. Though the Doctor cremates the Master's body on a pyre, his ring remains and is obtained by a coven loyal to him.

Creation of the "Master Race"

By Christmas 2010, as the Ood foretold, the Master's coven conduct resurrects the Master at HMP Broadfell, where Lucy was incarcerated before she sacrifices herself to sabotage the ritual. However, it only revived the Master in failing body with a ravenous hunger.

Resorting to wandering the fringes of London and feeding on homeless people and those unlucky enough to encounter him while being pursued by the Doctor, learning the sound of the drums is a signal, the Master is eventually captured by billionaire Joshua Naismith in order to use his knowledge to repair an alien 'Immortality Gate' to make Naismith's daughter immortal. But the Master hijacks the device, using its original purpose as a planet-wide medical tool to overwrite the DNA of every human on Earth with his own and create a "Master Race".

Using his duplicates, the Master triangulates the signal to its source: the Time Lord President Rassilon, before obtaining an unique Gallifreyan diamond to create a link through which the Time Lords emerge. Though he intended to overwrite his DNA onto the Time Lord race, the Master's work on the human race is undone as he learns the truth that he was nothing more but a pawn in Rassilon's plan to destroy all creation so he and the other Time Lords can transcend into beings beyond time. When the Doctor destroys the link, the Master attacks Rassilon to save the Doctor in an act of revenge for a lifetime of manipulation, disappearing into Gallifrey with the other Time Lords in the process.

The Genesis of the Cybermen

After forcing Rassilon to remove the signal in his head, the Master left Gallifrey and wandered the universe in his TARDIS before he ended up on a Mondasian colony ship trapped in the gravity of a black hole. When his attempt to rule them did not work out, the Master decided to play a role in the genesis of the Cybermen before encountering the Twelfth Doctor, and would end up meeting a future female counterpart named "Missy".

At that time, the Doctor was testing Missy's reformation. Meanwhile, the Master decides to disguise as a Russian janitor named "Mr. Razor." He befriends Bill Potts (one of the Doctor's companions), only to betray her and have her converted into a Cyberman. He then turns Missy against the Doctor. As a result, Missy finds her loyalty torn between her former self and the Doctor.

In the end, having become disgusted by the Master's blatant sadism, Missy stabs the Master in the back. She then declares that she will join the Doctor and redeem herself. In order to prevent this from happening, the Master shoots Missy with his laser screwdriver at full power, disabling her ability to regenerate and seemingly killing her permanently. The Master then cackles and regenerates into his next incarnation, effectively ending the "Saxon" Master's life once and for all.

In the audio drama, the Master attempted to avoid his regeneration into Missy by preventing his death, he used the energies of Kiameth, creating an entropy wave to take over the universe and kill the Doctor, he then brought his past incarnations to Kiameth, meeting Missy. These events were undone when the "War" Master killed the "Saxon" Master and his past selves and letting the wave absorb Missy, having realized the entropy wave was their final incarnation. 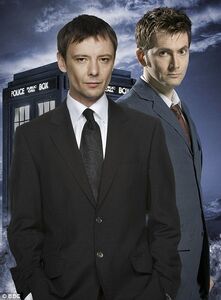 The Master and the Tenth Doctor on a promotional poster. 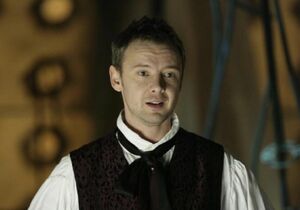 The Master steals the Doctor's Tardis. 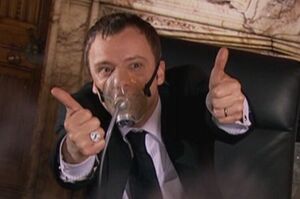 The Master gasses his Cabinet to death for being "traitors". 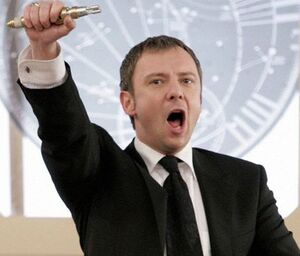 The Master summons the Toclafane and prepares to order them to decimate the population on Earth. 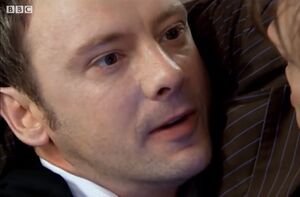 The Master refuses to regenerate after being shot by his wife Lucy. 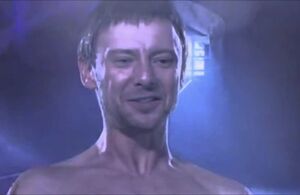 The Master is resurrected after a surviving part of him is retrieved. 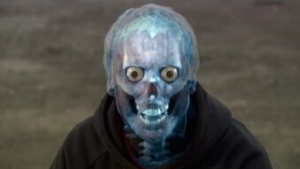 The Master flashes his decaying skull while terrorizing a couple of passersby. 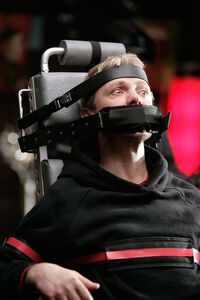 The Master is captured by Joshua Naismith. 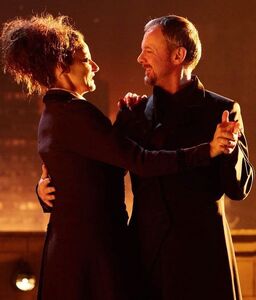 The Master dances with his future incarnation Missy. 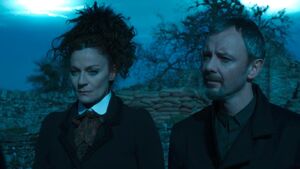 The Master and Missy refuse to stand with the Doctor during a Cyberman invasion. 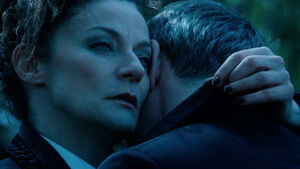 The Master is betrayed and stabbed by Missy.