Villains Wiki
Register
Don't have an account?
Sign In
Advertisement
in: Rewrite, Doctor Who Villains, Protagonists,
and 47 more

This page is solely for the "Yana" incarnation of The Master.

Running a vineyard
Running his peers in Utopia

Manipulate the Time War for his own ends. (Failed)

Escape from the Time War by transferring his memories and Time Lord physiology into a fob watch.
Steal the Doctor's TARDIS and regenerate into a younger body to further his goals of conquering the universe.(Both succeeded)

He was portrayed by Sir Derek Jacobi who also portrayed Dennis Fulcher in Inside No 9, and King Claudius in the 1996 film version of Hamlet.

The Master of Callous

In the early days of the Time War, the Master manipulated the human mining colony of Callous, especially the King family, to obtain the mineral Swenyo. In Call for the Dead the Master, via a phone carried by an Ood under his control, targeted Elliot King during the years he was trying to mine Swenyo. When Elliot eventually failed, he picked up the call, and the Master emotionally blackmailed him into killing himself for failing to be with his family. After Elliot's daughter Cassandra took over operations, the Master convinced the colonists to take their shares in the colony, and also forced Elliot's friend Jacques into kill himself so he could not be able to help Cassie. In the end, Cassandra was left with no other choice but to take up the Master's offer of aid.

As seen in Big Finish's UNIT story Master of Worlds, the Master battled the Cybermen alongside Kate Stewart and UNIT, eventually returning to "the fray" of the war.

Day of the Master

Rage of the Time Lords

At some point during in the Time War, the Master regenerated into a child's body. As seen in Titan Comics Eleventh Doctor run, this incarnation would ally with the War Doctor, until an attempt to flee the conflict resulted in him erasing himself in a paradox, leading him to revert his "War" incarnation without any memory of this life.

The Master managed to retrieve his TARDIS on Gardezza while posing as the Doctor. Inside, he received a call to return to Gallifrey and left to answer it. Romana and Narvin sent the Master alongside Leela to interrogate Finnian Valentine, and said that they would pardon him for his crimes. during which he discovered Arcking had a power source that could fuel the Time Lords energy banks. On the way back to Gallifrey, the Master expelled Leela into the time vortex and headed to Arcking. Travelling to hospital planet Arcking multiple times, the Master attempted to possess an ancient power, known as the Heart. Here he met the pilot Cole Jarnish, and took him on as a companion.

After manipulating Cole to turn his life into a paradox, the Master travelled to Stamford Bridge in the 1970s, where he located a Time Lord repository and killed Cole. Using Cole's life as a paradox to power it, he took control of the Heavenly Paradigm, wanting to use it to end the War. The plan backfired, and the Master unintentionally caused both the Time Lords and Daleks to win several battles they had once lost. Because of this, he then saw the Dalek Emperor took control of "The Cruciform", the Master, horrified by the intensity of the the war, decided to flee, and remained ignorant of the war's outcome as he used a Chameleon Arch which stored his Time Lord nature and memories in a fob watch and allowed him to become biologically a human baby, in order to disguise himself.

Physically human, the Master aged over time, growing from childhood into adulthood and eventually even old age. He was given the name "Yana" by his peers, and due to his great intellect, he quickly assumed a leadership role among them, with many counting on him being able to save the last vestiges of mankind from the end of the universe which was quickly closing in. As a person, Yana had problems with keeping time and was always late to appointments, and he was haunted by memories that didn't seem to belong to him and a strange drumming sound that only appeared into exist in his own head.

When the Tenth Doctor and his companions Martha Jones and Captain Jack Harkness arrived, he tells them about the end of the universe and his plans. Joining him in his laboratory to support him repairing his rocket, they accidentally caused Professor Yana to recall his Time Lord essence and become the Master once more, although they were actually trying to help him to reach Utopia. Mortally wounded when his companion Chantho shoots him with a gun after he fatally injured her with an electric cable, the Master regenerates into a new younger incarnation.

As "The War Master" the Master is a cruel and manipulative figure, only interested in his own side in the Time War. This Master is much calmer and cunning than his other selves, willing to play the long game with his schemes, and effortlessly put up an front as a charming and benevolent man. that being said, this Master is also a sadist, revelling in the most pointless of deaths for the fun of it, often tormenting his victims beforehand. He held everyone in equal disregard, often not showing any empathy with others, and dismissed the majority of species as primitives.

While the Master vehemently denied he was truly capable of benevolence when questioned by others, he still wanted to end the Time War, leaving the universe in one piece so that he could rule it. He could value certain objects he found to be beautiful, such as a unique rose, and enjoyed pleasures like cultivating wine. Unlike his more nihilistic incarnations, the Master did not wish to totally destroy the universe without building something better in it's place.

Under his human identity, Professor Yana was a kindly old man who inherited the Master's intellect, but none of his cruelty. He was a resourceful and inventive man, but he had lost hope in the Utopia Project until he met the Tenth Doctor, who considered him a genius, and the two mutually admired one another. He was also somewhat scatterbrained, not noticing Chantho's feelings for him, and slightly lacking in self-confidence, at one point referring to himself as "a stupid old man." Yana, much like the Master, craved validation.

After tempting Yana into restoring him, the Master quickly attempted to sabotage the Utopia Project, showing his callousness. He was vengeful towards Chantho, angry that she never took an interest in the fobwatch, and irritated at her ticks, condescendingly claiming he was "provoked" when Chanto when she pointed a gun at him. He also dismissed Yana as an invention. After his mortal wound, the Master felt being killed by her was "inappropriate" but welcomed his regeneration to renew his rivalry with the Doctor. 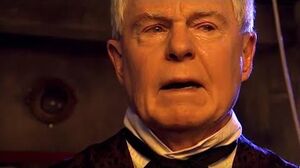 The Master Returns Utopia Doctor Who 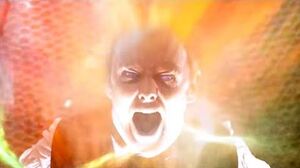 The Master Regenerates Utopia Doctor Who