The Master of the Valley

The heart of the Nest

Control over an army of knights and Tricos

Keep itself alive by consuming "chosen ones".

Capture the Boy and Trico (failed).

The Master of the Valley is the main antagonist and final boss of the 2016 video game The Last Guardian. A mysterious entity, the Master hides itself in the tallest tower called the Citadel of an ancient castle known as the Nest, where it magically controls an army of Armored Knights and winged beasts known as Armored Tricos to capture "chosen ones" as sacrifices to retain its immortality.

Very little can be deciphered on what the Master even is, where it came from, or how long it possessed control over the Nest, but given how old the Nest is (according to the legend of the "chosen ones"), the Master has likely been active for a long time, maybe just as old as the Nest or even older. The leader of the Nest, the Master sends forth its Armored Tricos to capture human children to be brought back, and the Armored Knights capture the few that try to escape within the Nest. Once the children are brought to it, they are given over to the Master and consumed to sustain its immortality.

However, the Master's plan backfired when one of the Tricos was struck by lightning on its way back to the Nest carrying a boy, or a chosen one, breaking its horns in the process, which severs its connection to the Master's control. Despite being hostile to the Boy at first, Trico soon grew to accept the Boy's care and helped him make it through the Nest, protecting him against the Armored Knights who continuously pursued the duo in order to capture the Boy. The Master eventually sent one of its Armored Tricos after the Boy, where it nearly succeeded in killing Trico due to its armor giving it an advantage, but the Boy managed to push a minecart onto its head, breaking its horns, also freeing it from the Master's control.

The Master is not seen until near the very end of the game, when the Boy and Trico make it to the top of the Citadel and discover the Master, where it summoned all remaining Armored Tricos into the area. While most of the flock flew around the Citadel to prevent the two's escape, the rest landed on the Citadel to chase after the Boy or hold down Trico for attempting to defend the Boy from the hoard, one severing his tail. Fortunately, the tail is thrown into the Master's chamber, where even severed the tail could still shoot lightning, and the Boy used the Mirror and the tail to break through the Master's shield and destroyed it once and for all. The control over the Armored Tricos broken, they uncontrollably plummeted to their deaths from the sky and Citadel as the Sun settled over the Nest, ceasing the evil rule of the valley for generations.

The Master is an immobile black orb covered in green markings similar to the tattoos on the Boy. The Master is protected by a metallic cage and a shield of dark energy to repel and stun anyone who came too close. The Master controls all creatures under its effects using a large antenna-like apparatus attached to the top of the Citadel, as well as similar structures spread across the Nest.

Even with its flaw of being an immobile ball, the Master is an entity of pure evil showing no sympathy for other lives and seems only concerned on keeping itself alive by consuming human children. Despite its short appearance in the game and unknown origin, the Master is a sadistic force at best, showing no mercy on how to obtain the Boy in any way possible, and also goes as far as to use its Armored Tricos to mutilate and almost kill Trico just for protecting the child. 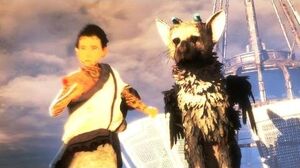 Retrieved from "https://villains.fandom.com/wiki/The_Master_of_the_Valley?oldid=4112115"
Community content is available under CC-BY-SA unless otherwise noted.