Keep reenacting the same scene over and over again (succeeded, until SKX interferes).

The Match Maker is one of the nine Metro City serial killers from 2005 survival horror game, Condemned: Criminal Origins.

It is heavily hinted by his MO and victim choice that the man who would later become The Match Maker could have had poor personal life. He might have been rejected by many women or one particular female that was extremely important to him. Judging by his age, it is possible that he have been living alone for years with the growing hatred towards the opposite sex before succumbing to his destructive desires. His facial scarring and index finger loss could also be related to his rejection. It is possible that he was married, but something led to divorce and during his attempts to stop her from leaving, she could have armed herself with a sharp object, severing his finger and disfiguring his face in self-defense. Apart from all those theories, his past remains a mystery.

During the events of the game, detective Ethan Thomas and several other officers are investigating the crime scene obviously designed by the serial killer known as The Match Maker. Through Thomas's visions it is revealed that The Match Maker is still at the crime scene, preparing his next "installation", but soon abandons this activity in favor of escaping from the building. He finishes smoking a cigarette and turns off building's main power switch, then leaves to his personal source of mannequin parts and possibly a current hideout, Bart's Department Store, closed down 14 years ago. Ethan Thomas pursues both the Match Maker and Serial Killer X - Leland Vanhorn and finds out through his psychic visions again that Leland ambushed the Match Maker, hitting him on the head with the mannequin arm from behind. Leland drags the body away, pushes it down the elevator shaft and continues dragging the Match Maker until he regained consciousness and tried clinging to on of the doorways. Leland then strangles his barely alive victim and places his dead body with a female mannequin (ironically) and tapes Match Maker's arm to mannequin's arm. His body will be later found and investigated by Thomas.

The Match Maker is a deranged misogynistic murderer, obsessed with his past rejection/divorce to the point that he reenacts the scene that traumatized him every time he kills a woman. Countless eyes drawn all over the walls by him may be a symbolic representation of how many people witnessed the traumatizing event, while child mannequins with gaping holes for a face might imply all the children that the Match Maker could have had with his lover. He is shown to be quite patient and a little mischievous - he slowly finished his cigarette and flipped the switch in order to mock his pursuers instead of leaving immediately. He is prone to symbolism, which indicates some degree of sophistication. Also the way he designs the scene may be due to his occasional psychotic states and hallucinations, which he expresses artistically.

It should be noted that he has enough physical strength to choke someone with just one arm and possesses an amazing endurance and pain tolerance, being able to stay alive after being hit with a mannequin arm so hard blood splattered on a nearby wall and being pushed down the elevator shaft head first. 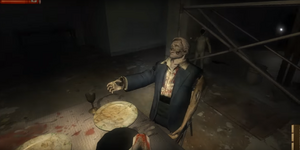 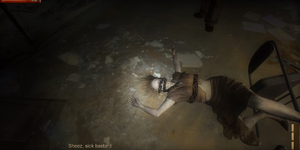 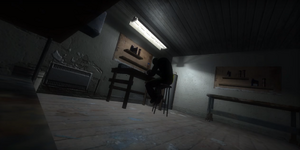 The Match Maker prepares another prop.

The Match Maker is mentioned in some newspaper articles.

Leland is about to hit the Match Maker from behind. 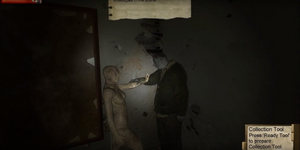 Match Maker's corpse.
Add a photo to this gallery
Retrieved from "https://villains.fandom.com/wiki/The_Match_Maker?oldid=3763930"
Community content is available under CC-BY-SA unless otherwise noted.