Crushing everything in his path.

To take over Volcano Island (failed).

To drain energy from the worlds outside Earth to make him stronger (failed).

The Mawgu is the main antagonist in "Nicktoons: Battle for Volcano Island". He is the archenemy of the Wise Old Hermit's people.

He was voiced by Fred Tatasciore, who did Dennis in the "The SpongeBob SquarePants Movie video game".

He escapes from his prison and attemps to take revenge on the people of the Island who imprisoned him with a terrible ooze that can take over anything and make them his minions.

So as to do this, The Wise Old Hermit summoned "The Chosen Ones" to stop him (Spongebob Squarepants, Patrick Star, Sandy Cheeks, Squidward Tentacles, Danny Phantom, Sam Manson, Tucker Foley, Timmy Turner and Jimmy Neutron). The Chosen Ones had to overcome many challenges and enemies, both weak (like sand monsters and seagulls) and strong (like The Great Carapace and King Gorge) until they finally got to The Mawgu. A great battle ensured.

While Timmy, Patrick, Sandy and Sam distracted the monster and Danny and Spongebob fought it and it's minions (with a little help from Squidward), Tucker had finished the Rip-Zipper he and Jimmy were working on and sealed The Mawgu inside the "Rip" right after he says "This isn't over, Chosen Ones!". Finally, the island is at peace and the islanders have carved the heroes faces into the side of a mountain.

The Mawgu has a cameo in "Nicktoons Attack of the Toybots" as one of the contestants of the Biggest Genius alongside Plankton. 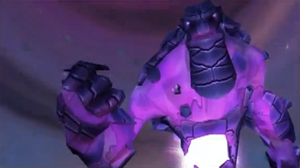 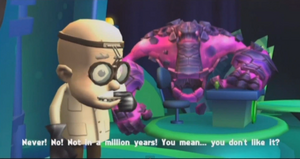 Retrieved from "https://villains.fandom.com/wiki/The_Mawgu?oldid=3760545"
Community content is available under CC-BY-SA unless otherwise noted.