To cleanse the Commonwealth of evil (formerly, dependent on player choice).

Make up for what she's done (dependent on player choice).

The Mechanist (real name: Isabel Cruz) is the main antagonist of the Fallout 4 add-on Automatron. She is a robotics expert-turned-aspiring superhero staying in the Commonwealth in 2287.

She was voiced by Stephanie Lemelin.

While growing up in an unknown settlement as child, Isabel Crutz was as timid and soft spoken child which led to her being a social outcast. This lonliness drover her to robots and comic books. To cope with her loneliness, Isabel built Sparks, an Eyebot who she would cherish as her first ever robot and real friend.

Sometime after she became an adult, Cruz stumbled upon the remains of a caravan wiped out by the horrors of the Commonwealth. While scavenging for anything of worth. She found a drawing of the Mechanist, a comic book villain (which she mistook for a hero) from before the War. Feeling like she had found her true calling. Isabel became inspired by the Mechanist and chose to become like him, in her own words, "it was too late to save that caravan, but becoming the Mechanist was [her] way of keeping hope alive." sometime after finding this drawing. Isabel stumbled upon an old General Atomics factory, but when she delved deeper into the ruins, she found a secret military base undeground, dedicated entirely to robotics beneath the RobCo sales and service center. Believing she'd found another sign of her destiny to become the Mechanist, Cruz built incredible robots from what she could find, and hoped to save the Commonwealth.

To accomplish her goals, she tried her hand at recreating Robobrains after recovering some schematics and the factory having plenty of stored brains to create them. Eventually she succeeded at assembling her own model which she designated Jezebel. However, this robobrain was captured by an up and coming raider gang named the Rust Devils. Despite this loss, Cruz was not discouraged; if anything, Jezebel's capture prompted her to upgrade her other Robobrains built better for combat to ensure this never happened again, and bring the facility's command center back to its original functional state. Between finding the picture and the facility, Isabel realized that she truly had a shot at making the Commonwealth a safer place for wastelanders to live. Planning on making an expendable robotic army which could police the region (even within a 15 mile radius) and protect the Commonwealth settlers from the wasteland's horrors.

Despite these good intentions, There was one thing Isabel hadn't taken into account: There was a reason Robobrains had never been mass-produced. The machines developed a sadistic misinterpretation of her orders, believing they were helping Humanity by exterminating them so they wouldn't suffer the Commonwealth any longer.

Completely unaware of this fatal flaw to her robots, Isabel continued her path of ensuring the Commonwealth was a safe place, when in actuallity she had become the villain by unleashing a reign of terror as the Mechanist, sending her robots all over the Commonwealth. The reign only came to an end when the Sole Survivor confronted her in her lair where two outcomes happened

1 - Should the Sole Survivor convince her of the her robobrains causing death and chaos, Cruz feels extremely remorseful and betrayed, both by her robots and herself. She looks at everything she accomplished, how she programmed her robots to do help people, and how it all blew up in her face. As recompense, she remains quite busy tracking down rogue robots for the Sole Survivor to put down, still waiting for the truth about her actions to fully sink in.

2 - The Sole Survivor kills Isabel without explanation as to why they're there, takes over her facility and ends her unwitting reign of terror.

As Isabel Cruz. She is a shy and timid person who truly wants to help the Commonwealth using her knowledge of robots. And (provided the player chooses the peacful option) is truly horrified and remorseful once she learns that her robobrains have been killing innocents due to misinterpreted orders. Spending the rest of her time wracked with guilt over what her robots have done. Isabel also reveals she's always been lonely, which is why she spent so much time reading comics and making robots, leading to the two merging together into her alter-ego.

As the Mechanist. Her personality does a complete 180. She is confident, slightly prone to anger and irritable ,and not afraid to vanquish (what she perceives) as evil. As the Mechanist she doesn't care about her robots, viewing them all (with the exception of Sparks) as expendable. Despite this personality change, the Mechanist isn't beyond reason, as (with successful speech checks) she is willing to reason with the Sole Survivor and reveal her identity. She also holds the Sole Survivor as the Silver Shroud in high regard. As she expresses shock at the notion the Shroud could be a criminal and admits that in battle she is no match for the Silver Shroud, showing that even with her confidence boosted as the Mechanist, she's still obvious to her limits. 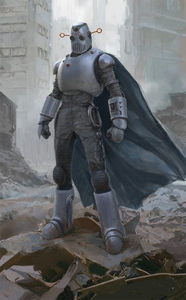 Concept art of The Mechanist. 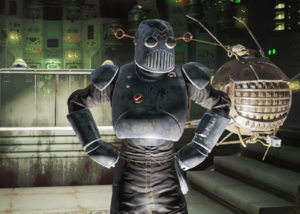 The Mechanist in her lair (alongside her companion Sparks). 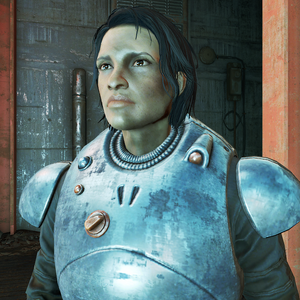 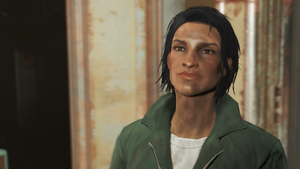 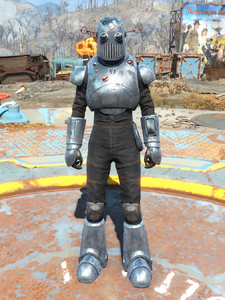