The Meg (first female Megalodon in the book)

The Meg: A Novel of Deep Terror

Kill Jonas Taylor and his crew (both failed).

The Meg, also known as the Megalodon, are the titular main antagonists of underwater thriller novel series of the same name, and the 2018 film based on the first installment of the novels. Megs are fearsome and extremely massive prehistoric sharks who terrorize anything that stands in their way. The Megaladon is the biggest carnivorous fish that has ever lived on Earth.

Megalodons appear to be huge sharks with massive mouths and large sharp teeth. They appear to be much larger than regular sharks, measuring over 20-25 meters.

The Meg was accidentally released from the Mariana Trench by Jonas Taylor, who was examining the wreck of a submarine. The wreck was also caused by the Meg. This Meg wreaked terror until Jonas Taylor dove into the shark's mouth and used a Meg tooth that he had found a few years earlier to rip out the heart of the creature. However, before that happened, the Meg gave birth to a pup named Angel, who later in the novels gave birth to pups Lizzy and Bela.

The Meg attacked a submarine at first. However, she was so large and unseen, that nobody knew yet what the cause was for the accident of the submarine. The submarine's crew of divers went to find out what caused the accident. They at first blamed a giant squid for doing so, but then the Meg ate the squid.

As the crew rushed back into the submarine, and the Meg came back, Toshi sacrificed himself to that shark. The crew eventually comes to the conclusion that the shark that attacked them was a Megalodon, a prehistoric shark that became extinct 2 million years ago.

They were the largest sharks to ever live in the oceans, with some possibly growing to be over 70 feet long. But were thought to have gone extinct until now. At first, they assumed that the Megalodon was left behind in the recently discovered area where they encountered him. Only to be proven wrong when she devours a mother whale off-screen and then her pup in front of Jonas, Suyin and her daughter when the pup appears distressed. The crew dive again and manage to find the Megalodon and poison her with a large dose of etorphine, killing her.

However, after comparing the shark's mouth size to the one that attacked them earlier, it is revealed that the shark which they have killed was another smaller shark. Suddenly, a colossal female Megalodon bursts out of the water, swallowing The Wall whole; who had been swimming in the water after being pranked, grabs the dead Megalodon and lands right on the boat. Her enormous weight causes the boat to capsize and leave the crew swimming in the water.

The Meg then kills Heller, who had distracted it so she wouldn't kill Jaxx, and wounded Zhang, who eventually dies from his injuries. That night, Morris orders a helicopter crew to drop depth charges at the Meg. They move in closer to take some of her teeth but realize that they accidentally killed a whale instead. Realizing that she's still out there, the boat's driver forces the boat's engines to full throttle, causing Morris to fall overboard. He swims back to the carcass and climbs onto it, only to get devoured by the Megalodon as she bites into the whale carcass, leaving only one of his hands.

Later, the crew learns that the Meg is heading towards a crowded beach and could kill dozens of swimmers near Sanya Bay. The Meg manages to get near the beach and its swimmers; the Meg starts to attack the swimmers and even devours a few. However, before she could eat another crowd of swimmers, the crew on the ship used distressed whale sounds to attract the shark and keep her away from the swimmers. The Meg then attacks the boat but does little damage to it. The Meg chases Jonas' sub through a small coral reef. However, two news reporter helicopters who were watching the shark carelessly collided with each other, which causes one of them to crash into the ship, forcing everyone to jump into the water.

Realizing that explosive torpedoes will not work, Jonas Taylor, the leader of the diving crew and the film's main protagonist, decides to make the Megalodon bleed to death.

Taylor swims beneath the fearsome shark and manages to cut her stomach open using his damaged sub. After that, he swims back to the shark's front and stabs a knife into her to hang on. Then he pokes the Meg in the eye with a harpoon. Then, as they both breach the surface of the water, Jonas pushes the harpoon further into the predator's eye, immobilizing her. After they fall back into the water, the shark suddenly starts to move. Shortly afterwards, a massive swarm of smaller sharks came and tore into the wounded Meg, finally killing her. One of the small sharks is seen swimming out of the Megalodon's lifeless jaws. 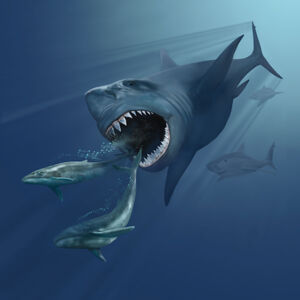 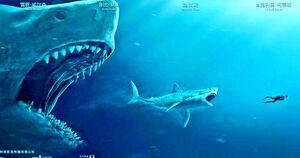 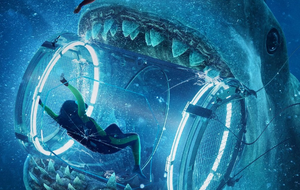 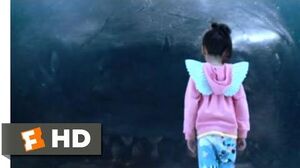 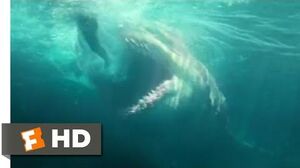 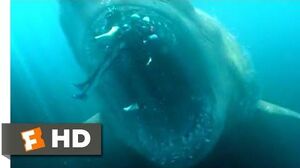 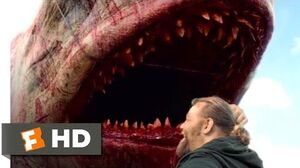 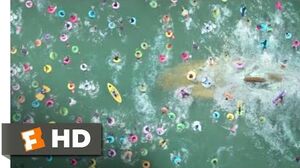 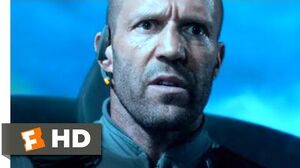 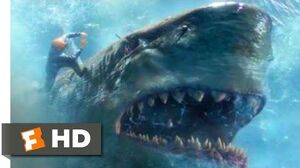 Retrieved from "https://villains.fandom.com/wiki/The_Meg?oldid=3517654"
Community content is available under CC-BY-SA unless otherwise noted.