The Mighty Endowed is a minor villain in Young Justice, created by Detective Comics.

She was created by Peter David and Todd Nauck.

Professor Nina Dowd was directing an excavation to find possible relics of an ancient civilization when one of her assistants discovered a car wheel-like artifact buried in the ground. Dowd eagerly went to inspect this find. Her co-workers were afraid it could be dangerous and warned her not to touch it, but she scorned such nonsense and laid her hand on the artifact. There was a blaze of light and she was instantly sealed into a crystal cocoon.

Dowd's assistants called the DEO to deal with the event. Soon the Young Justice team (Robin, Superboy, Impulse, and the recently awakened Red Tornado) arrived and offered to assist the DEO in the investigation. Impulse managed to crack the cocoon and from it emerged Professor Dowd, transformed into The Mighty Endowed. They barely got a chance to fight before Dowd's new upper body weight caused her to fall over and unable to stand, which she was then taken into DEO custody.

Some time later, she attempted to escape from All-Purpose Enforcement Squad Headquarters inside Abraham Lincoln's head at Mount Rushmore, having hypnotized two men to hold her up with her "headlights". Agents Ishido Maad and Donald Fite fired their laser rifles at a mirror to reflect the shots and knock out Mighty Endowed's two brainwashed henchmen, falling to the ground with her. She was easily arrested once again.

Before Nina Dowd transformed into The Mighty Endowed, she had her hair tied in a ponytail. She wore glasses, a white t-shirt, green vest, brown shorts, and boots. She was also noticeably flat chested compared to her alter-ego.

After her transformation, she let her hair down, put on purple lipstick, lost her glasses, and wore a purple, black, and yellow jumpsuit with a purple collar. She also wore cat-like ears, grew cat-like fangs, claws, and gained black stripes all over her body. Also, despite her name, The Mighty Endowed's breasts are never shown in any panels in either of her appearances, always being obstructed with hypnotics lights or being just out of frame. 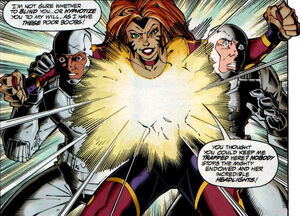 The Mighty Endowed with two hypnotized men holding her up.