Villains Wiki
Register
Don't have an account?
Sign In
Advertisement
in: Spoilers, Five Nights at Freddy's Villains, Paranormal,
and 34 more

Get revenge on William Afton for murdering them (abandoned).

They are the ghosts of five of William Afton's victims that were lured into the backroom of Freddy Fazbear's Pizza, brutally murdered, and stuffed in the suits of the Classic Animatronics. With the help of the Puppet, the first four possessed Chica, Freddy, Bonnie, and Foxy, while Cassidy's spirit became Golden Freddy.

After their resurrections, they dedicated their lives to trying to take revenge on Afton, mistaking numerous nightguards, including Jeremy Fitzgerald, Fritz Smith, Phone Guy, and William's own son, Michael, for him and killing most of them during their shifts. Eventually, Afton returned and destroyed the animatronics they were possessing, which would backfire as the children would cause his death and transformation into Springtrap, and in 2023 would ultimately ascend to the afterlife with assistance from the Puppet and Shadow Bonnie.

Aside from Susie and Cassidy, it is currently unknown what the children physically looked like before their deaths and possession of the animatronics. However, as ghosts, they are depicted in minigames as white silhouettes with black eyes and dark grey tears streaming from them. In the "Happiest Day" minigame, the spirits wear masks of the respective animatronics they possess.

While nothing about their background has been revealed as of now, the Missing Children were killed on/around June 26 of 198X (sometime before 1987), when two and later all five of them were reportedly lured into the backroom of Freddy Fazbear's Pizza by William Afton in the Spring Bonnie costume and went missing, having been murdered by William with their corpses hidden in the exoskeletons of the Classic Animatronics: Gabriel into Freddy Fazbear, Jeremy into Bonnie the Bunny, Susie into Chica the Chicken, Fritz into Foxy the Pirate, and Cassidy into Fredbear. Chica's quotes from Ultimate Custom Night imply that Susie was the first to be killed by William. While the corpses were never found, they would apparently begin to fester and decompose as blood and mucus seeped from them and through the suits they were trapped in.

Following this tragedy, the Puppet, possessed by Charlotte Emily (one of Afton's previous victims), took pity on the children and granted them "gifts" in the form of the ability to possess the animatronics they were trapped in. Around this time however, the animatronics had been decommissioned and left to wither in the Parts & Service room of the newly opened successor to the original pizzeria (though not before being refitted with criminal detection tech before they were replaced with the Toy Animatronics) and they would attempt to kill the nightguard Jeremy Fitzgerald and later successor Fritz Smith due to mistaking them for William because of their purple uniforms.

A year later in 1988, after the successor was closed, the animatronics would be modified as they once again became the mascots of the reopened Freddy Fazbear's Pizza. From 1988 to 1993, they would kill numerous nightguards working at the establishment, including Phone Guy. William's son, Michael, who was presumably investigating the mysteries of the pizzerias, would work at the location under a fake name and the animatronics, mistaking him for his father, attempted to kill him, but failed as he was fired for tampering with them.

After Michael's firing, the pizzeria would go out of business and close down, with the animatronics being abandoned in the establishment. One night, one by one, they were lured to the pizzeria's backroom by Shadow Freddy, only to be ambushed and wrecked by William himself. This would be a fatal mistake however, as the ghosts of the Missing Children were freed from the animatronic endoskeletons and chased William into the backroom. He equipped the Spring Bonnie costume in an attempt to protect himself, only for it to malfunction and fatally mutilate him. The spirits would disappear as William died, though he would eventually become Springtrap.

Decades later in 2023, with the help of the Fazbear's Fright nightguard (the identity of whom is implied to be Michael), Shadow Bonnie, and 8-bit versions of Balloon Boy, Mangle, Toy Chica, and Fredbear, the Puppet would organise a spiritual birthday party of "Happiest Day" for the Missing Children, allowing their souls to move on to the afterlife, although Cassidy would stay behind to enact further vengeance on William. That said, it's commonly speculated that before Happiest Day happened, Afton found a way to put their Remnant inside the Funtime Animatronics, with them later becoming Molten Freddy. 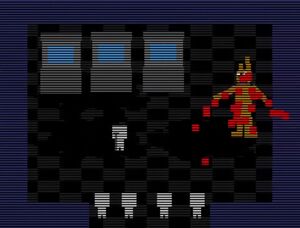 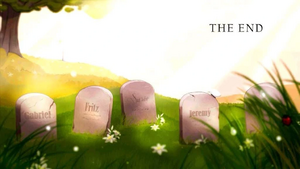 The graves of the Missing Children, as seen at the end of Freddy Fazbear's Pizzeria Simulator. 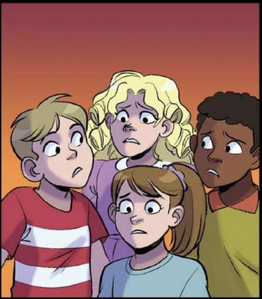