Send the Saturdays through the Mirror (failed)

Get revenge on Zak and Komodo for betraying them. (succeeded)

The Monday Family first appeared after Zak wakes up on a bed with a bruised eye and a bandaged arm as Drew Monday started nursing him while the rest of the family are also injured with Zon having bandaged wings, Komodo has his midsection wrapped, Fisk has his head-wrapped, and Doc is out of it and can barely even form any words. Zak Saturday's questioning and worry for his family, Drew puts him to bed, still pretending to be his mom.

After fighting on the airship, Drew before he can tell Zak S. that Drew isn't really his mother. She claims that she was just keeping him safe and then kisses Zak S. on the cheek before ruffling his hair, but the doubt about her identity was been planted.

Drew M. then reinforces Zak S.'s uncertainty where she makes him hot chocolate in an attempt to calm him down. After she explains why the universe comes apart when matter and anti-matter get close, Drew started snapping at him for over something innocent that he had on his side. She tries to brush it off, but he leaves, no longer trusting her identity.

Later, Drew M. arrives in the airship's medical bay to give Doc M. is medicine. Zak realizes that she isn't who she said she is and attacked her, knocking Drew over long enough for himself and the rest of his "family" to get away. Drew then started following him, and ending up wandering the nearby ancient ruins in an attempt to avoid/find each other.

When Drew finds Zak, she attempted to convince him that she's his real mother, by showing him the Smoke Mirror while explaining that both versions of themselves have to be nearby for it to be worked on. Drew Saturday then arrives and started shooting her by using her fire sword as Zak checks on one of them who again insists that she's the "real" Drew and needed to send the other one back through the Mirror.

Zak tries to prevent them from attacking each other, but a frustrated Drew Saturday takes his Claw and launches the grapple at the other Drew's face. She reflexively grabs it with her tongue, outing herself as the fake by mistake.

As Zak Monday arrives, where the rest of the family that Zak had escaped were revealed to be doubles as well, as he reveals that he kidnapped Zak's family while he was knocked out unconscious. While together, The families then started fighting each-other including the alternate selves, as Zak started gets his hand son the mirror while everyone is getting distracted.

While fighting herself, Drew then takes the first opportunity to grab the Mirror and attempts to use it on Zak. Only for her to be knocked over at the last second by Doc Saturday. as the Mirror ends up with Zak Monday, who Drew grabs it from. When accused by Zak Monday of planning to betray them, she points out that he was the one who exposed her to Zak Saturday. first. This causing it start a fight, where the two of them struggle over ownership of the Mirror while the rest of the Monday family are arguing.

When Zak Monday ends up winning himself, he immediately then tries to send the rest of his family back to the Shadow World. However, at the end of the episode, he and Komodo ended up escaping by using his fang as the left the rest of their family ignored by them. 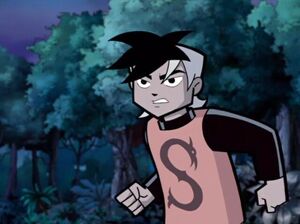 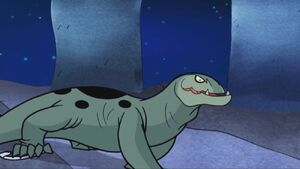 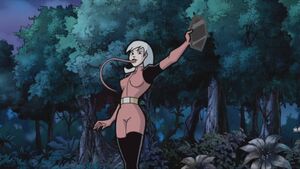 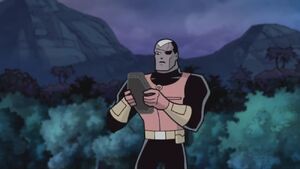 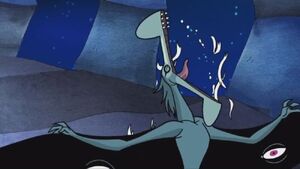 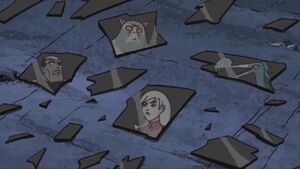 The Monday's imprisoned in the mirror 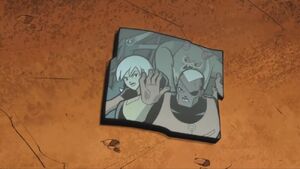 Retrieved from "https://villains.fandom.com/wiki/The_Monday_Family?oldid=4159545"
Community content is available under CC-BY-SA unless otherwise noted.