The Monster is the main antagonist of the 2012 horror film Under The Bed. It is based on the legendary monster under the bed, another name for the Boogeyman - like the boogeyman of legend, this monster is a more ghostly and demonic adversary than a traditional monster and more akin to a spiritual evil. It also has an extremely grotesque appearance.

He was portrayed by Ivan Djurovic.

The Monster was responsible for sending the protagonist to an institute for two years after his mother died in a fire, which was blamed on him - in reality, the mother died defending both him and his young brother from The Monster.

This would lead to a trouble reunion when the protagonist returned to his family home, meeting his father, his young brother and stepmother as well as a girl he had a romantic interest in and her two obnoxious kid brothers.

The Monster had began to target the protagonist's young brother in his absence and upon returning the protagonist himself is soon tracked down by the demon - which starts to plague him and his brother with night terrors and poltergeist activities.

Trying to "cure" his sons of what he believed was either insanity or a childhood fear the father sent them to a sleepover at a neighbors home, with the misfortune of their hosts being the two obnoxious brothers mentioned above.

However, this angers The Monster and it goes on the berserk, destroying the power in the protagonist's home and then manifesting in the neighbor's home where it snaps one of the vituperative and obnoxious brothers' neck and pursues the protagonist and his young brother back to their family home.

Once in the family home, The Monster commits its next heinous act when it mercilessly and without reason murders the boys' father in front of their eyes in an extremely aggressive and violent manner - literally tearing him apart as his stepwife screams in horror.

This climaxes in a battle with the two brothers and their stepmother trying to escape The Monster but the protagonist has had enough, after two years of being hounded The Monster pushes him too far when it violently abducts his young brother and he decides to kill the demon once and for all.

With the help of his stepmother he enters The Monster's realm and saves his brother, the three then race out of the family home and The Monster manifests in the garage - where the protagonist tries to kill it with a chainsaw, but it overpowers him. 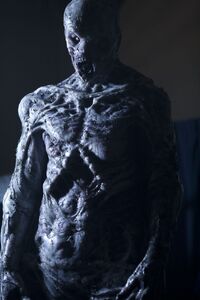 Add a photo to this gallery
Retrieved from "https://villains.fandom.com/wiki/The_Monster_(Under_The_Bed)?oldid=3279693"
Community content is available under CC-BY-SA unless otherwise noted.