The Moth is a recurring antagonist from the famous Nickelodeon animated series Spongebob Squarepants. He is one of the enemies of Mermaid Man and Barnacle Boy. As his name would suggest, he is a miniature moth person, who is attracted to light. His main crimes are stealing lamps, light bulbs, and other light-up or glowing objects. He made his first appearance in the episode, "Night Light" as the main antagonist.

He was voiced by the famous celebrity Mark Hamill, who also voiced the Joker in the DC Animated Universe and Chucky in the 2019 reboot of Child's Play.

In "Night Light", The Moth arrives at Spongebob and Patrick's houses, when he spotted a bunch of blindingly bright lights emitting from them. The Moth flew into Spongebob's house and Mermaid Man got ready to have a long-overdue battle with him. As Mermaid Man described, The Moth was his mortal enemy, who he had spent the past fifty-seven years of his life, searching for. Their battle was underwhelmingly short and unfulfilling as all that happened was Mermaid Man swing his fists around aimlessly, while The Moth just floated there, doing nothing without getting hit. Eventually, The Moth just kicked Mermaid Man in the nose and flew away. Mermaid Man tried to chase after him, but he was quick to get tired and collapse on the floor, falling asleep, allowing for The Moth to getaway.

The Moth flew up to the top of the lighthouse and prepared to embrace the beautiful light inside of it. Spongebob ran up the lighthouse, grabbed The Moth, threw him into the lantern room, and locked him in there. The Moth flew around like mad in there and kept crashing into the glass walls, desperately trying to escape, but sadly failing.

Spongebob proudly told Mermaid Man that he captured The Moth and that he wasn't going anywhere. However, The Moth was able to lift the lighthouse up off the ground, using his super strength to push up on the ceiling and fly away with it. The Moth laughed and told Mermaid Man that he'd be seeing him again in another 57 years, as he flew off into the night, stealing all of the lights, and leaving Mermaid Man defeated. 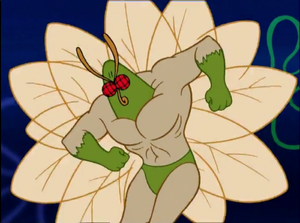 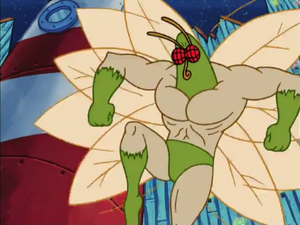 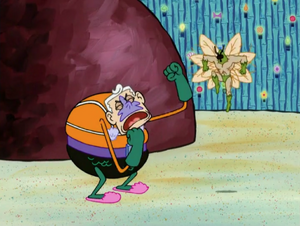 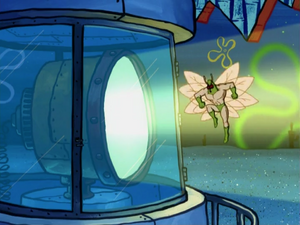