Creep
The Neighbour
The Lady next door

The Window Next Door

Sitting alone in her dark room.

Creeping out and harassing Hiroshi Sakaguchi.
Attempting to trespass Hiroshi's room through his window.

"Have fun" with Hiroshi by entering his room through his window (failed).

Numage, or better known as The Neighbour, is a mysterious entity and the main antagonist in the The Window Next Door manga by acclaimed Japanese horror-mangaka Junji Ito. She is a perverted, deformed yet terrifying neighbour of the main protagonist Hiroshi, taking a liking to him, the neighbour seeks to "have fun" with him by any means possible by breaching his privacy to trespass his room through his window as both their windows are facing each other.

Hiroshi Sakaguchi and his family move into a new house ina new neighbourhood. They are curious and suspiscious about the house next door, which has only one window. They discover that the inhabitant, a middle-aged woman, is never seen or spoken to; but neighbors have spotted a figure at the window during the night. When Hiroshi goes to bed he hears an eerie voice calling to him and sees a woman with a hideous, disfigured, corpse-like face and clawed, bony hands asking him to come visit her.

Hiroshi thinks it was all but a dream, but the following night he hears the voice again, now upset that he didn't visit. He looks out of the window to see Numage trying to climb across to his room using a long, rusty pole. Hiroshi knocks the pole down and quickly runs into his parents' room, calling for help. They couldn't see anything outside, and are not sure whether the woman is real. After some discussion the family finally agrees that Hiroshi will switch rooms with his parents.

Numage doesn't reappear, and a reluctant Hiroshi eventually moves back to his old room. When he goes to sleep, Numage appears once more, this time trying to reach over to his house with only her hands, hoping to knock on his window and enter. Hiroshi waits but she never arrives. In the morning it is revealed that the window itself has magically and ridiculously stretched out from the woman's house towards his own, and Hiroshi figures that by the end of that night, she'll be able to reach his window and have her "fun" with him. By the end of the manga, the family are discussing moving to another house.

Numage is simply the ultimate personification of an abomination who only god knows what she would do to Hiroshi when she reaches his room although she describes it as "having fun" it is implied she does have a sinister agenda as well. It is also implied by her demeanor that she is lusting over Hiroshi, who is a handsome young teenager which does eludes to her wanting to "have fun" with him. Regardless, she is straight up the definition of disturbing, creepy and treacherous. 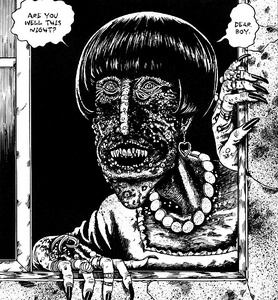 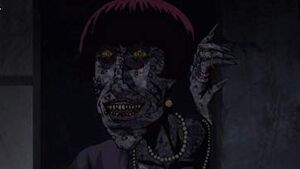 The Neighbour in the anime adaption. 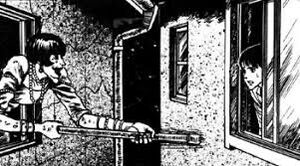 The Neighbour attempting to trespass. 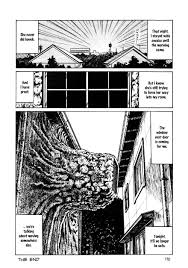 The horrifying discovery by Hiroshi and his family.
Add a photo to this gallery
Retrieved from "https://villains.fandom.com/wiki/The_Neighbour_(The_Window_Next_Door)?oldid=3589402"
Community content is available under CC-BY-SA unless otherwise noted.