The Neo-Nazis are a gang of Nazi thugs and the main antagonists in the 1982 vigilante action street gang film, Class of 1984. There are five members of the gang, all led by Peter Stegman, the core villain, though it is implied they have other connections and associates working for/with them.

Affiliated and does business with the gang but not a member.

They are first seen when they are harassing students in the music classroom until the new music teacher, Andrew Norris tells them to leave. Then after that, they go to a students locker to steal from their victims, until they spot an African American student named Leroy selling drugs. Seeing this as a black man encroaching upon his territory, Stegman orders Fallon, Barnyard, and Drugstore to stop him, then they take him to the restrooms and they beat him up, and Stegman tells him to get his gang and meet them after school, not before calling him the N-word and stole his cash. Later they are shown having a gang fight with an African American gang, but soon as the fight goes deep, the police arrive in time and Peter's gang escape. All the while, Norris attempts to reason with them, outwit them, persuade them, and at some point even attempt to out-muscle them - but the members of the gang are strong, clever (esp. Stegman) and malefic; making Norris efforts in vain.

Patsy stole the book to tell her fellow thugs of Norris' address, and they later drive to Norris' house and spray him with fake blood, then after that they go to their hangout, the Krash Klub where they do drug dealing, prostitution, racketing, and other crimes. Later on Stegman, Drugstore, and Barnyard are seen in the restrooms selling drugs to a student, with Fallon and Patsy guarding the doors. Soon Norris goes in the restrooms and he takes the gang to the Principal's Office to tell him about the drugs, but they tell the Principal that they just found it and Norris is just trying to get them into trouble so they get of the hook. Soon the kid who bought the drugs from them soon commits suicide by climbing of the school flag and letting go.

And their vileness turns nastier when they recruit a one-time hireling in the school to stab a student named Arthur for they thought was telling the cops about their deeds. Arthur luckily survives the encounter.

Stegman then successfully got Andrew suspended when he inflicted injuries on himself and framed the teacher for assault during a confrontation.

Later on the gang's savagery took on a new dimension when they cross the Moral Event Horizon when they break into Andrews home and gang-rape his pregnant wife. They then go to the school, where there's a orchestra concert going on and give Andrew photos of the rape. Andrew, finally pushed over the edge, abandons the orchestra concert and begins to hunt down the thugs. He kills Fallon by slicing his arm off with a saw, and slicing him in the back with it, he kills Drugstore by burning him alive, and he bashes Barnyards head with a pipe several times. Patsy tries to kill Andrew by running him over with the car, but crashes into a wall and killing Barnyard too as the car above falls on to the car Patsy drove, killing her in the driver seat.

With four out of five gang members dead, Andrew went to the roof to fight the evil leader Peter Stegman, who cuts his wife's breasts. Then Stegman and Norris get into a climatic vigilante battle which ends with Stegman hanging on the ropes and begging Andrew to pull him up. However he commits one final act of malice as he tries to cut Andrew, who in returns punches Stegman in the face and Stegman falls in the auditorium, with the rope hung around his neck and he dies, giving evidence that the Neo-Nazis reign of terror over the school are finally over. 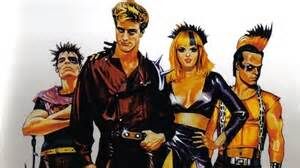 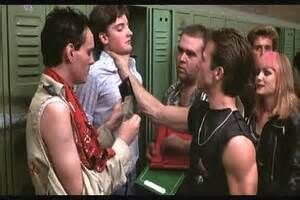 Drugstore holding the victimized student by the neck while Fallon steals his money as Barnyard, Patsy and Peter as they bully him. 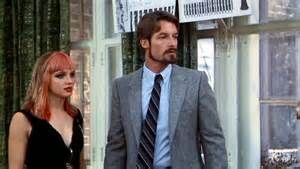 Patsy about to put a rude face on Andrew Norris. 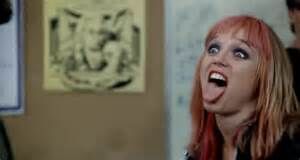 Patsy putting on her disgraceful face in Andrew's music class. 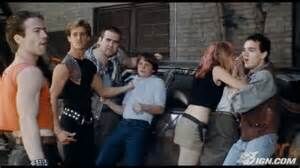 The Neo-Nazis make trouble in the streets 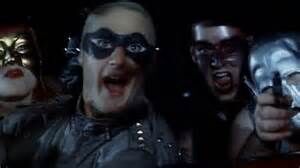 The Neo-Nazis laughing at Norris after they squirted fake blood on his nice suit, Poor Andrew. 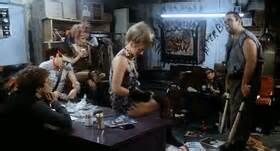 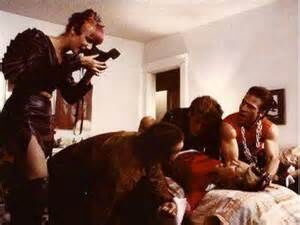 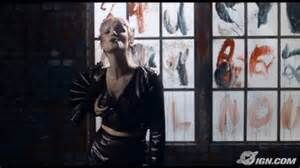 Patsy before death, as she lures Andrew into their trap
Add a photo to this gallery

Retrieved from "https://villains.fandom.com/wiki/The_Neo-Nazis?oldid=4146397"
Community content is available under CC-BY-SA unless otherwise noted.