King of the Minotaurs

Experimenting with his Minotaurs.

Become human to be with the Woman.

Conquer both Centaurworld and Humanworld as revenge against his human self (all failed).
Escape the Nowhere Place (succeeded)
Have Horse defeat him and kill him for his actions. (good side, succeeded)

The Nowhere King, originally known as The Elk, is the main antagonist of the Netflix original Centaurworld. He is the ruler and creator of the evil horde of Minotaurs that wage war against both mankind and the centaurs. He is also the arch-nemesis and evil counterpart of Horse, and his Elk half self, The General.

The Nowhere King is a cruel, relentless creature solely focused on eradicating both Centaurworld and the human world, willing to sacrifice anything in his pursuit of these goals.

As the Elk and his original centaur form, he is voiced by Brian Stokes Mitchell.

The Nowhere King was once an Elktaur of unknown name and a worker maintaining the Rift portal in Centaurworld that led to the one in the human world, connecting the two. The Elktaur experienced prejudice at the hands of the very humans he served and wished to be human himself in order to fit in and have a better life. He met the Woman (formerly a princess who traveled back and forth between the worlds) and became immediately smitten with her. The two developed a friendship and fell in love, but the Elktaur was convinced the Woman would never be able to be with him because of their species difference so, using the magic Key powering the portals, he created a device to split a centaur's human and animal/plant halves from each other and used it on himself, resulting in his division into a human man and a talking Elk.

The man got his wish and married the Woman, but the Elk was reduced to become a wild animal, living alone. Unhappy with the result of things, the Elk confronted the man (now a general) and claimed that they had made a mistake in separating, and that the Woman could have loved them as they were before as one whole being. He threatened to tell the Woman the truth, and the General, intent on not losing what he had obtained, attempted to kill the Elk but stopped when he almost died himself, realizing that despite their division their lives were still connected and one couldn't kill the other without dying too. Instead, the General had his soldiers capture and imprison the Elk in a small windowless cell for 10 long years.

The Woman eventually learned of her husband's actions and origin; disgusted, she freed the Elk and told him to escape but couldn't go with him. The Elk, now enraged, vengeful, and traumatized from his imprisonment, returned to the Nowhere, the empty space between Centaur and human world, and altered the device to now instead fuse man and animal into monsters called Minotaurs, in a twisted attempt to "create" a family of his own. Feeling he belonged nowhere, the Elk fused many animals and kidnapped humans and created an army. Able to control the Minotaurs with his mind, he unleashed them upon both human and Centaurworld, sparking a bloody war that lasted years and claimed countless lives. The repeated use of the device also had terrible side effects on the Elk's body, his skin and flesh rotted into black sludge, his antlers grew into a large, fungal shape, he grew multiple insect-like legs, and only his skull remained as a reminder of the animal he once was, thus the Nowhere King was born, a serpentine, vicious beast with only hatred, destruction, and death in his heart.

The Nowhere King confronted the General and the Woman at the Nowhere Place, and the latter shattered the Key into multiple pieces with her magic in order to close the doors between worlds. The shockwave from this threw the Woman into Centaurworld and the General into the human world, with the Key now scattered across the realms. The Nowhere King, however, ended up trapped between the realms' spaces with no way out, but his Minotaurs remained in the human world, carrying on his orders to wage war. The General stayed in the human world to lead the resistance against the Minotaurs, while the Woman stayed in Centaurworld, ever-vigilant that the Key would remain in pieces so the portals stay closed and the Nowhere King trapped.

Despite the Woman's efforts to stop her, Horse and her friends were able to open the door between Centaurworld and the human world. While crossing the Nowhere to return home, Horse encountered the realm's solitary inmate, who sensed his chance for escape had come at last. But the centaurs rallied against the Nowhere King, and after a lengthy battle, Rider ran him through with a spear, causing him to erupt in a violent explosion that made the temples holding the doors collapse. Though at first the Nowhere King was thought to have been killed, he soon emerged from the rubble on the human's side of the door and met with the Minotaur hordes. Now that he has reclaimed his throne, it can only be a matter of time before Centaurworld feels his wrath once more.

With the assembled Key in his possession, the Nowhere King uses it to further experiment on the Minotaurs and turn them into even larger and stronger creatures, despite the best attempts of Rider and Waterbaby to stop him. With his army fully prepared, the Nowhere King leads them to the portal to Centaurworld, intent on wiping it out once and for all, but he is met by Horse, Rider, and the Herd at the battlefield. Horse uses her newfound magic powers to physically enter the Nowhere King's mind, freezing him in place and thus his Minotaur army, in order to stall them and make enough time for the human and centaur armies to arrive. This does not last long, however, and the Minotaurs awaken from their suspended animation just as the centaurs appear.

As the two factions battle outside, Horse meets the uncorrupted form of Elk inside the Nowhere King's mind, the sole remaining piece of good left of him. The Elk shows Horse his backstory, from his beginnings as an Elktaur to his transformation into the Nowhere King and eventual imprisonment. Meanwhile, Horse's magic over the Nowhere King fades and he breaks loose, laying waste to the battlefield and killing many centaurs. He becomes aware of Horse inside him and tries to trap her forever within his mind, but Elk transforms into an exit door and begs Horse to put an end to his dark self before she escapes. The General and the human resistance arrive to aid the centaurs, but he stabs Rider to stop her from killing the Nowhere King with an explosive arrow. He confronts his other half, both aware they cannot kill each other, and are met by the Woman riding on Becky Apples. Stunned that she is still alive, the General tries to explain and defend his actions to her, claiming that he did what he did to survive and that he loves her. Seeing the wounded Rider with Horse, the Woman, furious by the pain, lies, and death the two divided beings have brought to her and everyone, chases and pushes the General off a cliff into a deep chasm. The Nowhere King is grievously wounded by this and falls in the chasm as well, ending the battle. The Woman follows them to the bottom and finds the dying Nowhere King next to the dead General. She magically fuses them back together into the Elktaur, and the former lovers share a final lullaby, the Woman explaining to the Elktaur she already loved him as a whole being and didn't need to change, the Elktaur accepts his fate before the Woman tearfully kills him with her Key staff, ending his reign of terror once and for all.

With the Nowhere King gone, peace returns to Centaur and human world and the two species are able to once again co-exist in harmony. His Minotaurs, free of his mind control, are also restored from their feral and violent behavior and change their ways with help from the centaurs' good magic. 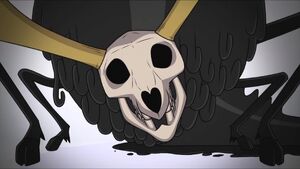 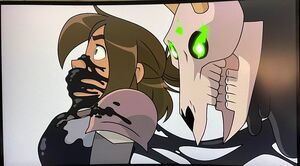 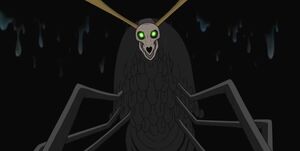 Trapped within the Nowhere.