Martial-Artist Minion
The Nutcracker is a minor antagonist from Robot Chicken. He's one of the three martial-artists legends hired by Mrs. Claus, the other two being Little Drummer Boy and Composite Santa Claus.

The Nutcracker appeared in final episode of Robot Chicken's first season. He was one of the three martial artists hired by Mrs. Claus to kidnap Santa Claus' Reindeer and beat up Santa Claus. He is first seen remarking on how he and the other two martial artists successfully ruined Christmas. Then both Goku and Gohan appear to come and stop them. After the two defeat the Little Drummer Boy, Gohan goes after the Nutcracker. He runs over The Nutcracker with a flying crowd, but then The Nutcracker uses his 42nd attack on him, crushing his testicles with his arm. After this, he is destroyed by one of Goku's attacks.

Knowledge of 100+ Testicle-Based Attacks - The Nutcracker has mastered more than 100 attacks involving crushing male genitalia. We were introduced to two different kinds, which involve using his fist and feet. 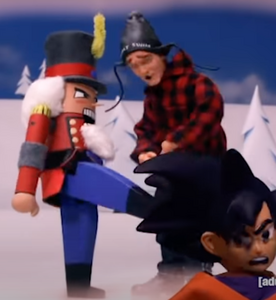 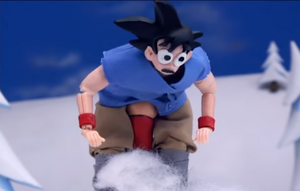