Remain the single most powerful species in the universe (failed).
Enslave dragons to make biomechanical advancements (succeeded).
Force dragons to either always obey them or idle away (failed, depending on players' actions).

Genocidal Aliens
The Old Ones, or "Them" are the main overarching antagonists of Aground.

The Old Ones are a highly advanced alien species who mastered both magic and technology to cement their power in the universe. To craft their ships, they gained the trust of wyrms which they evolved into dragons, but soon betrayed them and forced them to undergo reluctant evolutions into biomechanical space vessels of high power. Just one bomber was able to fight a whole fleet of Earth ships before it was finally destroyed. Eventually, humanity began to advance themselves, both in technology and magic courtesy of The Alchemist, causing the Old Ones to view them as a potential threat to their power. To prevent humanity from becoming such, they launched a bombardment against Earth, forcing humanity to evacuate it forever and nearly lose enough numbers to face possible extinction.

The Old Ones are by large evolved, arrogant, and genocidal space monsters who desire absolute domination of all other life forms. Although they didn't initially desire to betray the dragons, they saw them grow much stronger than anticipated and feared they could become a threat, so they forcibly evolved them into ships to make them easier to control and exploit. It should be noted that the Alchemist's discoveries of magic and his own advancement was the last straw for the Old Ones hence their declaration of war against all humanity.

One particular Old One, found on Eastern Island in the game, broke off from the rest of her kind and found the secret to immortality, but remained just as arrogant and tries to kill the player instead of willingly sharing her secrets of magic.

Another Old One, The Exiled, became thoroughly disillusioned with the practices of his kind and was banished to Mars where he hijacked old Earth frequencies and took a liking to Earth entertainment programs. If the player meets him, he will grant some quests that guide the player to the spirit world and face the final boss. he will also explain the Old Ones' primary motives and goals if the player talks to him some more.

The first Old One the player sees. 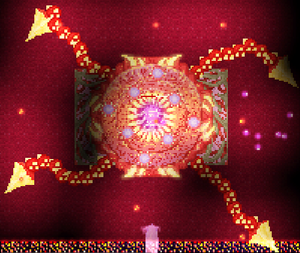 The final boss in their first phase. 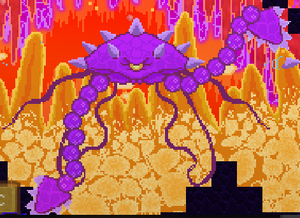 The Nursery Crab.
Add a photo to this gallery
Retrieved from "https://villains.fandom.com/wiki/The_Old_Ones_(Aground)?oldid=3615979"
Community content is available under CC-BY-SA unless otherwise noted.