Punish Jack for his supposed failures and have him commit seppuku (almost succeeded, but failed).

The Omen is a mysterious spirit who serves as a major antagonist in the fifth and final season of Samurai Jack.

He resembles a ghostly black silhouette of an armored samurai with glowing eyes riding on a horse, surrounded by an ominous green fog. Upon revealing himself, he appears to have no visible face and a noose around his neck. He also has a deep, dark voice. It is later revealed that the reason he haunts Jack is because he has neglected his purpose as a samurai, and insists that he commit ritual suicide by seppuku to make up for his failure.

He was voiced by Aaron LaPlante, who also voiced the Dominator, another villain in Season 5.

Very little is known about the mysterious Horseman, except that he stalks Jack at various points; it can be noted that he always appears whenever Jack has feelings of intense guilt or doubt in himself.

The Omen first appears on the other side of a stream, after Jack hallucinates seeing his parents and multiple corpse-like people. The area becomes black and the rider appears with a ghastly green background, shocking Jack as he glares menacingly at him. The Omen appears again that night, as Jack is tormented by a hallucination of his Father in flames, after which his signature horse whinny alerts Jack to turn around and see the Horseman again, imprinted on a rock. The next day, in the middle of Jack's battle with the assassin Scaramouche, the Omen appears on a nearby hill, watching Jack's hallucination of the city's slain children.

Later, the Omen appears a fourth time as Jack hides inside the parts of a previously destroyed Beetle Drone. As one of Jack's hallucinations of himself pleads with him to "join his ancestors", Jack turns to look through the crack of the Beetle Drone's shell, only to see green mist surrounding the area and the Omen staring at him. Jack manages to see past the Omen and his misty fog, therefore finding a temple to seek refuge in.

After being grievously wounded and narrowly escaping from the Daughters of Aku, Jack tries to find shelter in a forest, only to turn around and notice the Omen waiting for him. Jack tries to ignore the spectre, but discovers that its mount can move. As Jack continues his search for shelter, the Omen refuses to be ignored and continues to stalk Jack while still on horseback, never taking his eyes off him.

Inside one of Aku's factories, The Omen seemingly claims victory as he notices Jack's grief over the unconscious kidnapped children (who Jack believes to be dead) and speaks to him for the first time, telling Jack "It is time". A broken Jack simply answers "yes" and follows the Horseman out of the factory, leaving Ashi and the children alone.

Some time later, Ashi finds the Omen in an ancient graveyard encouraging Jack to commit seppuku (Japanese ritual suicide) for his failure, guilt, and loss of purpose. Meanwhile, the spirits of four armored samurai's, presumably Jack's ancestors, emerge from nearby graves. He attacks Ashi when she tries to stop him, but upon hearing the truth about the children, Jack intervenes and duels the Warrior. After a brief fight, Jack vanquishes him; bisecting him and causing him to disappear completely. Meanwhile, the samurai spirits solemnly return to their graves. 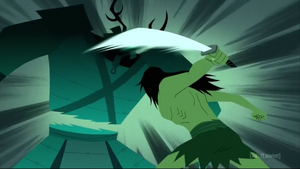 The Omen is defeated by Jack. 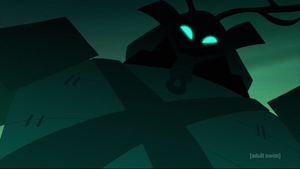