Lurking around in his tower (after his business collapsed as the trees died from being chopped by him in his attempts to harvest their fluff).

Harvest Truffula trees to keep his business as strong as ever (succeeded until they died out).

The Once-Ler is the anti-heroic main protagonist and narrator of Dr. Seuss' 1971 book The Lorax, and its TV adaptation and the deuteragonist/central antagonist of the 2012 film adaptation of the same name. Before turning into a regretful recluse, he was an enigmatic individual who seeks to expand his business of making Thneeds, confronting the Lorax in his endeavors. The book and TV special makes his physical appearance mostly a mystery, while the film adaptation shows his full body.

In the 1972 animated special, he was voiced by the late Bob Holt. In the 2012 film, he was voiced by Ed Helms who also portrayed Andy Bernard in The Office, Number Two in Meet Dave, Brad Gurdlinger in We're the Millers, and Mr. Krupp in Captain Underpants: The First Epic Movie.

The Once-ler is a man, or similar, who came to a bright forest of Truffula trees to set up shop and make a garment called the "Thneed" out of the trees' fluffy foliage. The titular Lorax appears from the stump of the first tree he chops down and insists that he stop, but a passerby purchases the first Thneed, encouraging the Once-ler to start a business making Thneeds.

The Once-ler's Thneed business quickly grows in size and popularity, and more and more trees are cut down to make more, as the shop grows into a factory, and the forest becomes more and more damaged and polluted, driving off the local fauna. The Lorax continues begging the Once-ler to stop, and showing him the damage, but is still ignored. When the very last Truffula tree is cut down, the Once-ler's family abandon the business, and the Lorax "lifts" himself into the air and vanishes, and leaves behind only a stone platform marked with the word "UNLESS".

Over the years, the Once-ler has resided in the remains of his factory, where he has come to regret his past. When a young boy comes to his house, the Once-ler tells his story and eventually realizes the Lorax's final message: "Unless someone like you cares a whole awful lot, nothing is going to get better. It's not." He gives the boy the very last Truffula seed in existence, telling him that if he plants it and takes care of it, the forest, the animals and the Lorax may eventually return.

In the film, the Once-ler is a young man who sought to make his invention, the Thneed, despite his family's belief that he would amount to nothing. He eventually arrives at the Truffula forest and decides that this is the perfect place to make his Thneeds. However, after chopping his first Truffula tree, the Lorax arrives and warns him to stop, but the Once-ler dismisses him. The Lorax later attempts to drown the Once-ler, but eventually is forced to save him after one of the local Bar-ba-loots nearly drowns in the process. With that, the Lorax and the Once-ler make a deal not to cut down any more Truffula trees.

At first, the Once-ler merely harvests the Truffula leaves to make his Thneeds, which eventually become popular and grow into a high demand. To fulfill this demand, the Once-ler hires his family to help make the Thneeds. His mother recommends that he cut down the trees to accelerate production, and under pressure, he does so, eventually causing the Lorax to call him out on his broken promise. After the last Truffula tree is cut down, the fauna all flee, and the Lorax lifts himself into the sky, leaving one last message: "UNLESS."

Over the years, the Once-ler has resided in the remains of the Truffula forest until he meets Ted Wiggins, who is looking for a Truffula tree to impress his crush, Audrey. After telling his story over the course of a few days, the Once-ler realizes what the Lorax meant and hands Ted the last Truffula seed to right his wrongs. Once Ted manages to plant the seed, the Once-ler emerges from his house and thanks him.

In the film's epilogue, with the Truffula forest slowly coming back, the Once-ler reunites with the Lorax.

In the book and TV special, the Once-ler is never fully seen. His only visible traits are his green arms, hands, and legs, as well as yellow eyes. In the TV special, he is hinted to be human, when he boasts to "speak for men, and human opportunities". The book also mentions a "gruvvulous glove," hinting that his green arms are gloves; if so, they are worn by his entire family and staff, who appear (symbolically) as hands operating his machinery.

The film adaptation depicts him as a human with fair skin and blue eyes. In his youth, he has mop-like black hair and a rounded face with light freckles. He initially wears a gray fedora, a white shirt, a gray vest, and green gloves. He also has gray striped trousers and black boots. As he becomes corrupted by his business, he dons a green suit, tie, sunglasses, and a top hat, while his gloves become shoulder-length.

In his elderly age, he retains his suit, gloves, and hat (much the worse for wear), but now has a Thneed scarf around his neck. His hair has become gray and receded, and he sports a mustache akin to the Lorax's.

In his youth, the Once-ler is very optimistic and enthusiastic, but so excited by his own success, he is quickly corrupted by greed. In the book he is rather brusque, even calling the Lorax a 'poor stupid guy' and telling him to 'Shut up'.

The elderly Once-ler is rather a tragic figure; and even earlier, is the only member of his numerous family (who make up the majority of his staff) to show any remorse for the havoc wrought by their business. The Once-ler's deforestation not only makes him an immoral man, but also a poor businessman, as he never thinks of preserving trees to ensure a steady supply of his products. In reality, nearly every North American lumber company plant at least three trees for every tree cut down. Whether this practice antedates the book is never explained.

While he is also just as bad in the film, otherwise even more noticeable than in the other adaptation and original, it is clear that he was not made entirely the villain in the film, leaving the blame almost entirely in some other created character that did not appear in the book. This, like the other changes, seemed to bother a lot of people when it comes to the moral of his story, that anyone could be bad if he took things too far. 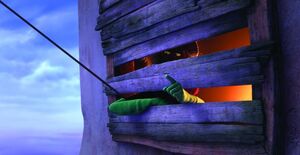 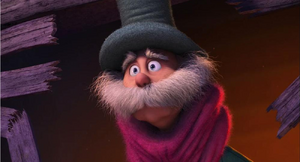 The elderly Once-ler reveals his face at the end of the film. 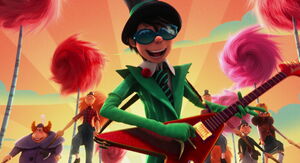 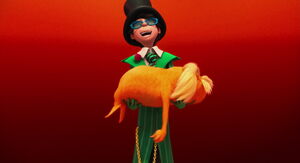 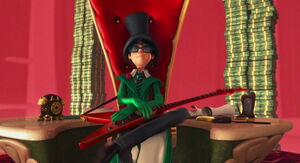 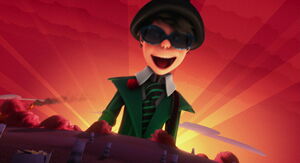 "And the lawyers are denying!" 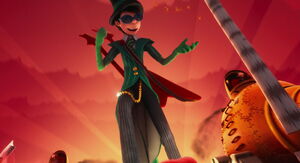 The Once-ler towers over the Truffula Forest near the end of his song. 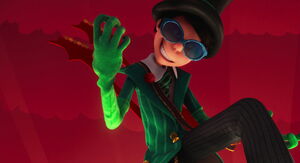 The Once-ler's evil grin as his song nears the end, foreshadowing him destroying the environment with his business ("How bad can this possibly be!?"). 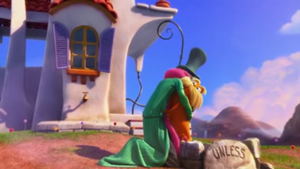 The Once-ler reunites with the Lorax after he becomes overjoyed about Ted undoing his evil actions.