Mom
Momma
Isabella (by the fandom)

Mother of the Once-Ler

Vice president of the Thneed company

Cut down many trees with her son and become rich (temporarily succeeded; failed once the business ended).

The Once-ler's Mother is the posthumous overarching antagonist of the 2012 adaptation of The Lorax.

She was voiced by Nasim Pedrad, who later played Gigi Caldwell in the first season of Scream Queens.

The Once-Ler's mother is a greedy and failure-intolerant woman who just cares for money and success. She is somewhat manipulative and abusive, especially to the Once-Ler, her youngest son. Judging from what we see in the flashbacks, she belittles the Once-ler for his business ideas and just starts to treat him well after his Thneed business proves to be a success, under the pretext that she was just trying to motivate him into striving to achieve his goals to make up the fact that she neglected him. Even so, she treats Brett and Chet, her two other sons, as workers or tools just because they aren't productive.

She also has a lack of business insight since she never takes into account of reserving resources (the tree) to create a long and stable business instead her greed blinds her to the fact that she willing to pressure the Once-Ler to chop down all the tree until nothing left to make the business function. Of course, when the Once-ler loses his business, she returns to belittle him and leaves him for good but not before she names Brett her new favorite child. In the end, her greed and short-sighted contribute greatly not only to the Once-Ler's downfall, but also to Aloysius O'Hare's rise to power.

The Once-Ler's mother helped cut down the trees and is the mother of Bret, Chet, and the Once-Ler. She is snobby, money-crazy, somewhat manipulative, selfish, and cruel to her youngest son. It was only when his business began to thrive that she finally praised him.

She constantly belittles the Once-Ler, and was said that he would not amount to anything all his life. However, this was not the case when the Once-Ler created and mass-produced the successful Thneed, which has become very popular.

Even when the Once-Ler happily taunted his mother of his success as a businessman, she simply brushes this off by claiming that she was only motivating him into creating his business.

She is the one who convinced the Once-Ler's continue cutting down the trees, making her somewhat the true antagonist. Mostly its clear that she wants the Once-Ler to make the business more successful to keep her well kept. Once the last one falls, she says that she is disappointed in the Once-ler, disowns him, and names Bret as her new favorite child (it is either because she was disappointed in her son for cutting down the last tree, that there are no more trees to cut down, or that the Once-Ler cannot keep selling Thneeds). She is the only villain in the film to get away with her crime but without the Once-Ler's money, she has to live the less luxurious life again, indicating that she at least gets her karma (unless she took the rest of how much money the Once-ler still had). 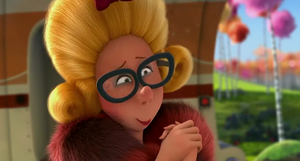 Retrieved from "https://villains.fandom.com/wiki/The_Once-ler%27s_Mother?oldid=4072858"
Community content is available under CC-BY-SA unless otherwise noted.