The Other (Marvel Cinematic Universe)

Leader of the Chitauri

Command over the Chitauri

Serve Thanos in his plans (succeeded)

The Other is a recurring antagonist in the Marvel Cinematic Universe. He is the leader of the Chitauri and emissary of Thanos. He first appeared as the secondary antagonist of The Avengers and later as a minor antagonist in Guardians of the Galaxy.

He was portrayed by Alexis Denisof, who also played Zander in Batman Beyond.

The Other stays on the alien home world, telling Thanos that the universe will be his once he has the Tesseract, and in exchange Loki gains control of Earth. The Other also warned Loki that if he failed to give Thanos the Tesseract, Thanos would find him and punish him.

After the army of Chitauri was destroyed, the mid-credits scene revealed that The Other and Thanos survived, as their area was separate from the one that got blown up. The Other informed Thanos that Loki failed because the humans fought back, and weren't as defenseless as he had thought. He told Thanos that to fight them would be to "court death". At this, Thanos decided to take matters into his own hands.

In Guardians of the Galaxy, The Other called Ronan and Nebula over to Thanos's domain when Gamora betrayed them and the Orb was kept from them. Ronan argued with The Other, and raised his voice, to which The Other yelled at Ronan to lower his tone in front of Thanos. In response, Ronan used the power of his hammer to twist The Other's head 180 degrees, snapping his neck and killing him. Thanos took little notice of this, and starts speaking for himself.

The Other seems to possess super speed, which he demonstrates to run over to Loki at one point in response to him reminding him that they do not yet have the Tesseract. He also teleports Loki to the Earth at one point. Not much of his power has been seen, however, as he is not seen in action as much and is original to the film series. 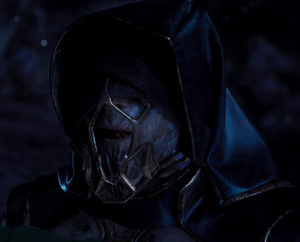 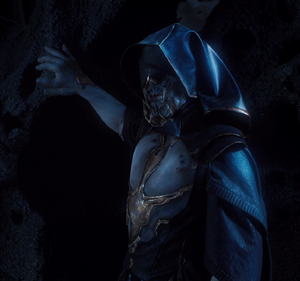 The Other speaking to Loki. 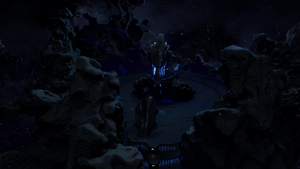 The Other kneels before Thanos' Throne. 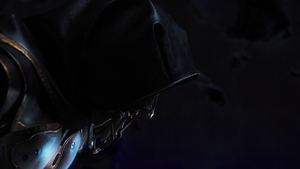 The Other bowing to Thanos.

The Other, Nebula and Ronan below Thanos and his throne.

Ronan looking at The Other as his neck is snapped by the Universal Weapon.