The Pachyderm was a one-time villain from the 2016 reiteration of the Cartoon Network original series The Powerpuff Girls, only appearing in the episode "Green Wing". He is an evil elephant who robs banks, and is actually Louis Pasteur in disguise.

Green Wing busted in and told The Pachyderm that she was not going to put up with him and his evil ways. The Pachyderm charged her way to attack her, but Green Wing jumped into the air to dodge him. The Pachyderm ran right past her, and crashed into the wall behind her, apparently unable to stop, after gaining so much traction, when he started running. As he bashed head first into the cement wall, a giant fiery explosion happened.

After The Pachyderm's little fiasco, Green Wing was able to rope the bastard up and see who he really was, as The Pachyderm was just a disguise, being worn by somebody else. When she unmasked the criminal, it was revealed that he was actually the historical figure and 19th century French chemist named Louis Pasteur. Louis Pasteur admitted to Green Wing that now that she had defeated him in battle, he would tell her the secret code to some kind of secret work, he was doing on asteroids.

After this, things plummeted into a vat of all-out weirdness. A baby-headed snake slithered up and congratulated Green Wing on her success, in a British accent. An anthropomorphic disco ball dropped from the ceiling and said that it was time for them to celebrate with a dance party. Everybody started dancing, including Louis Pasteur, and in came a walking, talking fork, and a green ghostly kitty cat. Six months later, they were all elected president of Ham Island. This is where the story ended, because Buttercup started to question the legitimacy of any of it. 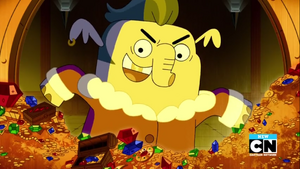 The Pachyderm breaking into safe. 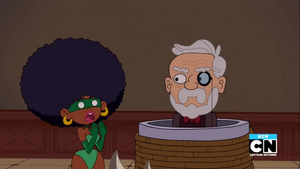