Strength
Strong taste for violence
Funding from the Project

The Pervs are a group of violent psychopaths in the 2007 video game Manhunt 2.

Made up of violent degenerates, which include cannibals, pedophiles and murderers, they're arguably the most sadistic and frightening characters of the game besides Leo Kasper. They were hired by The Project to brainwash anyone they send them.

They make up for their lack of military experience and discipline by their boundless depravity. They're also the most powerful gang, as they have a shop, a club, several red rooms to torture their victims, and equipment, all of this funded by the Project. In addition, the Project grant them immunity for their crimes.

The Pervs will be hostile to Daniel Lamb as he wasn't allowed to enter their club and will look for him, although they're all slaughtered by the protagonist as he's looking for one of the Project's head.

The Club is where most Pervs are encountered. Although the Club seems to be a harmless libertine club at first glance, it actually has a dungeon located beneath the main place in which the most hardened Pervs can torture and kill random victims at their leisure.

The dungeon has several “red rooms”, which are rooms where people are either brutalized or brutally slaughtered by the Pervs. It also has sophisticated torture devices that are not seen in the main club, such as an iron Maiden that can be used to swiftly execute one of them. All the tortures and murders are recorded by Pervs behind a window; although they make snuff films with this, it seems that the Project is also using their tapes for research.

The main goal of the club is recruitment and turning innocent people into mindless zombies ready to obey and all orders given to them. 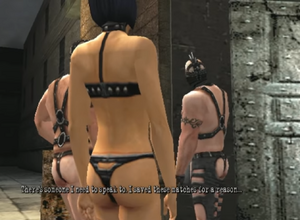 Two men and a female stripper entering the Pervs' Club (quotation from Daniel). 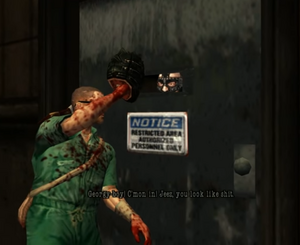 A Perv tricked by Daniel Lamb (quotation from the Perv). 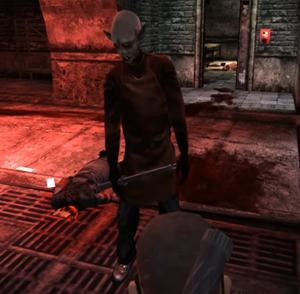 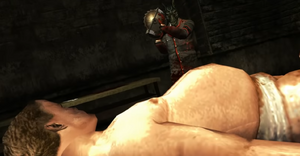 A man about to be brutally slaughtered by a Perv with a circular saw. 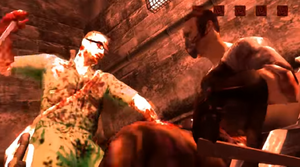