An array of supernatural powers
Near-immortality

Make Christine the best opera singer the world has ever seen.

The Phantom of the Opera is the main antagonist of the 1989 film of the same name. Unlike his counterpart, who is portrayed in a much more sympathetic and tragic way, this phantom is an evil serial killer, who is much more evil and violent than the original phantom.

He was portrayed by actor Robert Englund, who also played Freddy Krueger.

The Phantom's original name was Eric Destler. He was a young composer who was trying to write a new opera back in 1881. When he was practicing one day, he was approached by a man who told him he could make Eric's music as famous as Beethoven and Mozart. In return, however, Eric would have to sell his soul to Satan. Eric agrees. However, Satan only promised to make Eric's music famous, not Eric himself. The Devil mutilated Eric's face and told him that while people would love his music, no one could ever love Eric himself again.

All the skin on Eric's face falls off, and Eric starts skinning people, so he can sew their skin on himself.

Christine Day lives in New York City in 1989. While trying to find a piece to perform at an opera audition, she finds a piece called Don Juan Triumphant by Eric Destler. While performing at her audition, she is knocked out and transported to London in 1881. Christine's identity changes mysteriously, she know is an opera singer who has no knowledge of her life in 1989.

Meanwhile, The Phantom meets Christine in her dressing room and tells her that he is her "angel". He tells her he will teach her how to become one with the music.

The Phantom does everything in his power to make Christine advance in her career. He kills a stagehand, and stores the corpse in the dressing room of the main actress of the show. She becomes so shocked she can't perform and Christine takes her place.

When a critic writes a bad review of Christine's performance, The Phantom kills him in a bathhouse. The Phantom continues to help Christine with her music, and is falling in love with her. He then forces her to marry him, and tells her she is now one with the music. Christine, however, is already engaged.

The Phantom finds out about Christine's fiance and kidnaps her. In the commotion, Christine is transported back to New York City in 1989. The producer of the show, Mr. Foster, gives her the part she was trying out for, and invites her to his apartment.

While there Christine finds a copy of "Don Juan Triumphant" and figures out that Mr. Foster is the Phantom. After a confrontation, Christine tears off the Phantom's mask to reveal his true face. She runs out of the apartment with his music. She tears up the music, thus killing the Phantom the only known way, by destroying his music. 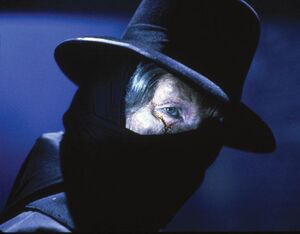 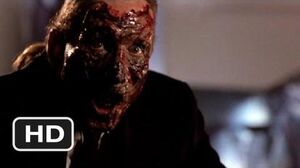