The Phantom of the Opera (original)

Phantom of the Opera

The Phantom
Angel of Music
Angel of Death

In the original novel, few details are given regarding Erik's past, although there is no shortage of hints and implications throughout the book. Erik himself laments the fact that his mother was horrified by his appearance and that his father, a master mason, never saw him. It is also revealed that "Erik" was not actually his birth name, but one that was given or found "by accident", as Erik himself says within the work. Leroux sometimes calls him "the man's voice"; Erik also refers to himself as "The Opera Ghost", "The Angel of Music", and attends a masquerade as the Red Death. Most of the character's history is revealed by a mysterious figure, known through most of the novel as The Persian or the Daroga, who had been a local police chief in Persia, following Erik to Paris; other details are discussed in the novel's epilogue, e.g. his birthplace is given as a small town outside of Rouen, France.

Born hideously deformed, he is a "subject of horror" for his family and as a result, he runs away as a young boy and falls in with a band of Gypsies, making his living as an attraction in freak shows, where he is known as "Le Mort Vivant" ("The Living Dead"). During his time with the tribe, Erik becomes a great illusionist, magician, and ventriloquist. His reputation for these skills and his unearthly singing voice spreads quickly, and one day a fur trader mentions him to the Shah of Persia.

After escaping from the Shah's order of execution, Erik finds a place to live beneath a Paris Opera house that is still under construction. Upon the completion of the opera house, Erik planned to retreat to his lair and "never wake up". However, over the course of the novel, he falls in love with Christine Daae and kidnaps her. Christine's lover, Raoul, comes looking for her with the aid of the Phantom's friend, the Persian. As part of a deal, the Phantom agrees to release Raoul so Christine will marry him. The Phantom does not keep his end of the bargain and keeps Raoul a hostage.

Upon returning to Christine, she helps the Phantom realize the error of his ways. Erik then releases Christine to be with Raoul. Christine promises to return to bury the phantom after he dies. 3 weeks later Erik dies and Christine keeps her promise, burying Erik with the ring he gave her.

The plot for the 1986 musical adaptation follows the story of the novel fairly closely with some minor changes. The plot of the musical, like the novel, revolves around Erik's love for Christine and his efforts to be with her. Also like the novel, the musical ends with the Phantom realizing the error of his ways and allowing Christine and Raoul to be together. However, different from the original novel, at the end of the musical the Phantom does not die: after being left by Christine, he just abandons his lair and disappears leaving his mask behind.

Main article: The Phantom of the Opera (Universal)

Main article: The Phantom of the Opera (1989 film)

In the Leroux novel, Erik is described as corpse-like with no visible nose; sunken eyes and cheeks; yellow, parchment-like skin; and only a few wisps of ink-black hair covering his head. He is often described as "a walking skeleton", and Christine graphically describes his cold hands.

In Andrew Lloyd Webber's musical adaptation (taking a tip from Universal's 1943 spin on the story), only half of Erik's face is deformed (thus the famous half-mask often associated with Erik's appearance). His show was originally planned to have a full mask and full facial disfigurement, but when the late director Harold Prince realized that it would make expression onstage very difficult, they halved the mask. The logo featuring a full mask was publicized before the change. The deformity in the musical includes a gash on the right side of his partly balding head with exposed skull tissue, an elongated right nostril, a missing right eyebrow, swollen lips, different colored eyes, and a wrinkled, warped right cheek.

The lyrics in the Phantom's final scene in his lair have sometimes been interpreted to mean that the deformities affect his ability to engage in intercourse since having been questioned by Christine if she had been taken to become "Prey for [his] lust of flesh?", he then responds "That fate, which condemns me to wallow in blood/Has also denied me the joys of the flesh.". However, this has been clarified; the line instead refers to the Phantom's lack of sexual experience as a result of his face. His ability to engage in intercourse is further demonstrated in the sequel to Lloyd Webber's show, Love Never Dies, in which it is revealed that the Phantom and Christine had sex the night before her wedding, resulting in her pregnancy and her giving birth to their son named Gustave. 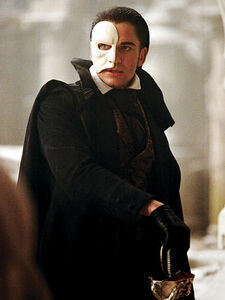 Gerald Butler as the Phantom of the Opera. 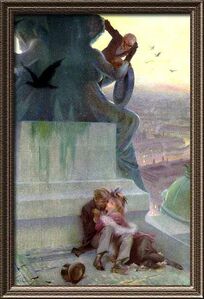 Andre Castaigne as the Phantom of the Opera. 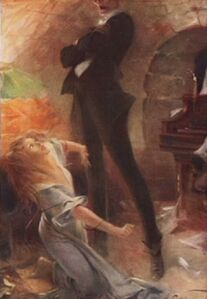 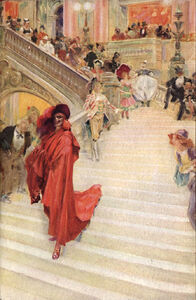 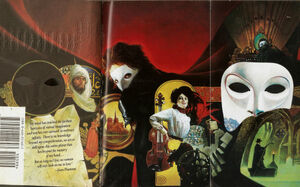 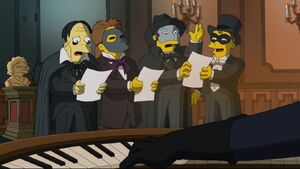 The Phantom of the Opera in The Simpsons.