Hobo With a Shotgun

Near indestructible armor
Near immortality

Capture or kill whomever they're paid to take care of (mostly succeeded).

Rip and Grinder, both known as The Plague, are supporting antagonists in the movie Hobo with a Shotgun. They are a contract killing duo who aid Drake, Slick and Ivan in capturing the Hobo.

The Plague are summoned by The Drake after he learnt that his favorite son, Slick, was killed by The Hobo after he attempted to kill Abby. Because Slick had managed to slash Abby's throat with a hacksaw, the Hobo took her to the hospital where she was saved, but while she was recovering both Rip and Grinder arrived in order to capture the Hobo. A doctor shoots at them in an attempt to protect Abby, but their armor is bulletproof and has no effect, so they proceed to kill him and several other hospital staff trying to help The Hobo.

The Plague and Ivan then bring the Hobo to The Drake, but Abby arrives and kills Grinder using a lawnmower and cuts the noose with an axe before Rip can cut off the Hobo's head. Abby is then captured by The Drake, who forces her hand into her lawnmower, forcing her to use the sharpened bone of her forearm to repeatedly stab The Drake. Rip then tells Abby that she must join The Plague as she killed Grinder and now he must be replaced, but the Hobo refuses and Rip departs, leaving The Drake to die at the hands of the Hobo.

In an alternate ending scene that was cut off from the film, Abby becomes part of The Plague.

They are two armored, mysterious killers. Although they resemble androids they are in fact demons, also, it is seen that they speak in their own language which consists of robot like sounds but they are capable of speaking English as well. Not much is revealed about them and it is implied that they have been alive for hundreds, maybe thousands of years. Their true forms are also never revealed as they wear their armor the entire time. They are also shown to have worked with the Drake and his sons on more than one occasion but they are never shown to be henchmen as they are not allied with anyone. Their method of transporting their captives is by locking them on a casket tied to their motorcycles.

The Plague has a very particular Hit List as it has both Historical and Biblical figures. Some of the included on the list are: 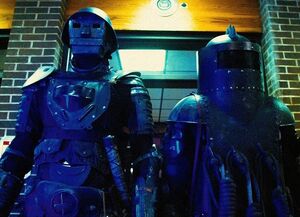 The Plague outside the hospital. 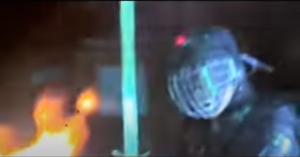 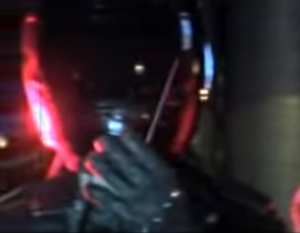 The second unknown Plague member from the original trailer. 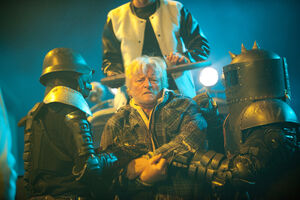