Villains Wiki
Register
Don't have an account?
Sign In
Advertisement
in: Tyrants, Mute, Evil from the Past,
and 32 more

Queen of the Cursed

Living Embodiment of the Cursed Realm

Queen of the Cursed Realm

Leader of the Ghost Warriors

Immunity to all but water

Ruling over the Cursed Realm

The Preeminent, also known as the Queen of the Cursed, is the overarching antagonist of Season 5: Possession in LEGO Ninjago: Masters of Spinjitzu, as well as a minor antagonist in Season 11: Secrets of the Forbidden Spinjitzu. She is the living embodiment of the Cursed Realm and leader of the Ghost Warriors who ultimate goal is to curse all of the sixteen realms.

The Preeminent first appears as a massive fleshy eyeball-like creature. The creature's main body was a teal color and resembled a sagging circle covered in long, lumpy tentacles and it housed the "face" of the Preeminent.

The front part of the body was opened and revealed two rings of flesh and a glowing green portal at its center that resembled an eye. The bigger and outer ring was covered in thin, wispy tentacles and was held open by six stationary tentacles that were shorter and more claw-like then the rest.

The inner and smaller ring looked and functioned like an iris and was able to open and close the the portal to pump out new ghosts from the fiery green portal at its center that seemed to act as a pupil.

The Preeminent soon gained a larger more humanoid form when her ghost army formed a mobile body from the City of Stiix. In this form the Preeminent was tall enough to be able to walk in the ocean and had several definable limbs. Its original body sat at the top center of a four armed, three legged, and stocky body.

The main torso was covered in the Preeminent's glowing tentacles which look longer and thicker than before, especially towards the lower part of the body. The arms were long and each sported claws and claw-like mechanisms. The entire thing was made of houses and dock parts, and glows in many spots with an eerie green light caused by the Preeminent and all of the ghosts helping operate it.

Despite never speaking within the show, several characters and actions hint to her relatively unseen personality. According to Fenwick, the Preeminent is easily more vile and wicked than all of the souls that she has converted into ghosts, to the point where she was unable to cross into other realms as a result. Additionally, she was willing to devour the souls of innocents without restraint in order to make herself more powerful, and in her conquest of the Sixteen Realms completely disregarded the consequences of her failure killing multifarious Djinn. Likewise, she was ambitious enough to seek control over the Sixteen Realms.

She also apparently had a more calmer and manipulative side, making an alliance with Fenwick in order to gain the Sword of Sanctuary. Likewise, she was patient and imperturbable, as noted by Morro. However, she was also extremely determined and intransigent, venturing out into the Endless Ocean, which was filled with her weakness, Water, in an attempt to devour more souls to become more powerful.

However, upon her death, the Preeminent showed a less dexterous and graceful side. Even as she began to dissolve in the Endless Ocean, she attempted to drag Morro to his death alongside her for little reason.

The Preeminent was the living embodiment of the Cursed Realm and had control of all of the hundreds (if not thousands) cursed souls within. She was able to produce an endless stream of them since if they died, they went to the Cursed Realm which is where the portal that served as her eye was linked to. The ghosts, despite being cursed to the Preeminent's dark realm, were fiercely loyal to her and her head servant Morro. They searched Ninjago for the realm crystal that could free her and made her a body out of Stiix when they believed she was in danger.

In either of the Preeminent's forms she was huge and able to regrow lost tentacles without batting an eye. The tentacles would even double when severed. She was also immune to the ninja's elemental powers and didn't even notice when they attacked her. She also had a greater resistance to ghost weaknesses. Sea stone only made her mad ( it is arguable if the stone itself caused her pain or the fact that it went into the portal from the wrong side) and while water caused her great pain she was still able to walk in it, though it is implied the ghosts helped somehow. While in the Cursed Realm she was able to float but was unable to once in Ninjago. When in her city body she was a walking fortress surrounded and inhabited by hundreds of ghosts.

The Preeminent was also an intelligent creature and was able to mastermind an escape from the Cursed Realm as well as a plan to curse all nine realms. How intelligent she is as well as her plan were fairly vague. Once she crossed over all she did was spit out ghosts who proceeded to fly around her not doing much. She seemed unable to communicate with them and it took Morro's intervention to get the ghosts to start doing anything. On the other hand when she grabbed Lloyd she knew he had the realm crystal and she was able to give Morro a ride on one of her tentacles, somehow knowing where he wanted to go. She was also able to work with the ghosts to move the Stiix body and knew to stop once she got to the edge of an abyss .

It is told that the more souls she consumes the bigger she gets and it was said she would have been able to curse all of the realms had the ninja not intervened. Had she not been summoned at Siix it is likely she would have been neigh invincible since only sinking her in an abyss was shown to destroy her. It can be inferred her plan was to absorb all of the souls of Ninjago into herself until she was big enough to curse the whole realm.  What cursing a realm entails is unclear. It is stated doing this would grant her control over all of the realms opposed to outright destroying them. It is also stated she has the power to ruin. So it is possible she could merge the other realms with her own in order to control them.

At some point in the distant past, the Cursed Realm came to be and from it came the Preeminent. It was was the embodiment of the realm as well as its queen. The Cursed Realm was a land of death, and spirits found their way there after death and others could be banished there using a specific spell. The Preeminent, for an unknown reason, gained aspirations to conquer all of the Sixteen Realms and assembled an army of ghosts to do so. For much of history, she remained trapped within an alternate dimension. She was too powerful to crossover to another realm and was unable or unwilling to send her army. This changed when Lloyd Garmadon opened a portal to release the spirits of Anacondrai generals to defeat Master Chen and his army. Morro was able to force his way through and possess Lloyd.

The Preeminent remained in her imprisonment until Morro was able to use the Realm Crystal to open a portal big enough for her to pass through. As she entered the realm she dragged Lloyd through to the Cursed Realm before pulling herself through entirely. She remained relatively stationary except for her tentacles which grew and spread throughout the city of Stiix, where she had been summoned to. From there she spewed out an endless army of ghosts to take over the realm. She was even shown to return recently killed ghosts back to Ninjago. The Ninja tried and failed to harm her using their elemental powers. Cole drove a large motorcycle, made from deep stone, into her portal eye which only made her angry. Lloyd escapes the Cursed Realm, and the Ninja evacuate the city and decide to collapse Stiix into the ocean in order to kill the beast. Morro realizes this and has the ghosts construct a body around the Preeminent to protect her.

Now the Preeminent was about four times her normal size and started working with the ghosts to control her new body. She spots the Ninja and villagers fleeing on a ferry and gives chase. At first, the water hurts her but she is able to be in it anyway. The Ninja climb onto her and reveal she has over 500 ghosts and counting within and around her. They try and sabotage her as Sensei Wu and Ronin drive the ferry to an underwater abyss in an attempt to drown her. The Ninja freeze her leg and defeat a few ghosts, but are unable to do any real damage so they flee back to the ferry. As the boat reaches the abyss, the wheel is destroyed. As the Preeminent is about to destroy them, Nya, the Water Ninja, unlocks her true potential and summons a wave to push the Preeminent face first into the sea. As it drowns, one tentacle fires up to Morro, who has the Realm Crystal, and tries to pull him down. He has a change of heart and gives Wu the crystal as he and the Preeminent are destroyed, along with the Cursed Realm. 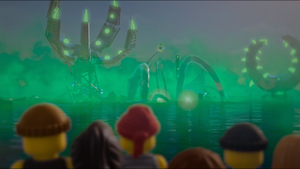