When the two heroes finally face Cyber-Lip, it warns them that it had been "evilly reprogrammed" before being destroyed. With the mission complete, the President congratulates them, but in a shocking twist he reveals his true colors, having been an alien in disguise all the time and being responsible for reprogramming Cyber-Lip. The game ends with him bragging about having no more obstacles to his evil plans before signing off transmission. Rick and Brook, exhausted in their fight against Cyber-Lip and being too far away from Earth, could only watch. Whether Rick and Brook went back to fight off this new threat or the President managed to defeat the pair of soldiers remains unknown. 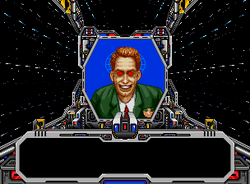 The President shows his true colors.
Add a photo to this gallery
Retrieved from "https://villains.fandom.com/wiki/The_President_(Cyber-Lip)?oldid=2663788"
Community content is available under CC-BY-SA unless otherwise noted.