The President is the leader of federal government of Earth and the true villain of the 1990 horizontally scrolling, side-view platformer shoot 'em up arcade game Cyber-Lip. It was one of few arcade games at the time that did not have an official happy ending. The president does nothing of villainy and throughout the whole game supports players until at the end reveals true nature.

The year is 2030 A.D. When Cyber-Lip, a super-computer which protected Colony C05 from invasion turned rogue and started to take over the colony's droid army, alien workers and attacking humanity, two veteran soldiers named Rick (who happened to be born from Colony C05) and Brooke are dispatched to take it down before its rampage can expand onto Earth. The President encourages, issues various orders and gives advice to the two soldiers during each missions, guiding them how to counter Cyber-Lip's army, potential tricks Cyber-Lips might have up in its sleeves, what to expect in each stages, and going after the rogue computer.

When the two heroes finally face Cyber-Lip in the computer room, it warns them that it is not insane but had been "evilly reprogrammed" before being destroyed in a duel. With the mission complete, the President congratulates them, but in a shocking twist he reveals his true colors, having been an alien in disguise all the time and being responsible for reprogramming Cyber-Lip. The game ends with him bragging about having no more obstacles to his evil plans and Earth now belongs to him before signing off transmission. Rick and Brook, exhausted in their fight against Cyber-Lip and being too far away from Earth, could only watch. Whether Rick and Brook went back to fight off this new threat or the President managed to defeat the pair of soldiers remains unknown. 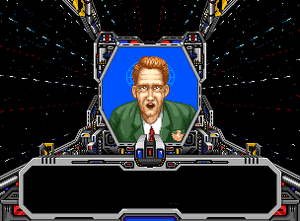 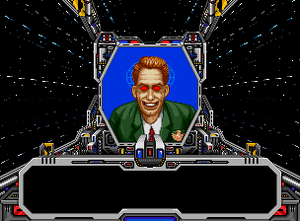 The President shows his true colors.
Add a photo to this gallery
Retrieved from "https://villains.fandom.com/wiki/The_President_(Cyber-Lip)?oldid=2663940"
Community content is available under CC-BY-SA unless otherwise noted.