The President (Kingsman: The Golden Circle)

President of the United States of America (formerly)

End the war on drugs by letting Poppy Adams kill all drug addicts.

Put Poppy Adams out of business (both failed).

Mass internment
Abuse of staff and of power

He was portrayed by Bruce Greenwood, who also portrayed Nick Parsons in Double Jeopardy.

The President is shown to be a corrupt and manipulative person in general, as he is willing enough to have all drug addicts (either innocent or not) killed in order to maintain his power while putting an end to the War of Drugs. He is also very deluded and treacherous, as he made no hesitation in betraying and locking up his Chief of Staff Fox after learning that she has been using drugs for stress relief, believing her to be a drug addict in general, though this eventually led to his downfall and arrest.

Rounding Up All Drug Addicts

After Poppy reveals her plan to the world of using a toxin on every illegal recreational drug available to kill every user unless the President of the United States end the War on Drugs and gives immunity to Golden Circle in exchange for the antidote, the President decides to have every affected user quarantined, intending to make it appear that he is acquiescing to Poppy's demands, while secretly, he intends to let all the affected die in order to 'win' the war against drugs and take credit for it. His Chief of Staff Fox begs him to reconsider his choice by telling him that not all users are bad and that there are innocent people among them, however, the President and the General McCoy ignore her and proceed to lock all users in cages in stadiums as they die. The Kingsman and the Statesman find out about the President's plans and they decide to stop both of them by releasing the antidote before is too late.

As the victims of Poppy's toxin (who develop blue rashes as first stage, then mania, paralysis and ultimately die) are been to stadiums to be locked on, Fox begs again to the President to change his mind, but he remains firm on his decision. Suddenly, Fox develops blue rashes, and the President, feeling betrayed, orders for her to be locked up as well. Fox explains that she only does drugs to relax from all the hard work she's doing, but she is ignored and imprisoned with the other dying users.

Closing A Deal With Poppy

When the Kingsman kill all of Poppy's staff, Eggsy kills Charlie Hesketh while Harry kills Poppy's cyber-dogs Jet and Bennie with the help of Elton John. Eggsy and Harry then proceed to kill Poppy by injecting her with infected heroin, just as she gives them the code for releasing all drones before dying from the overdose.

After fighting and killing Agent Whiskey, the agents release the drones, and most of the people are saved, including Fox, who then has the President impeached for conspiring to commit mass murder on the drug victims. The President is last seen looking out the Oval Office window at Fox's press conference.

He then turns around revealing that he's handcuffed, having been exposed for his crimes and ready to be arrested, much to his dismay. 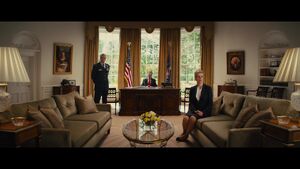 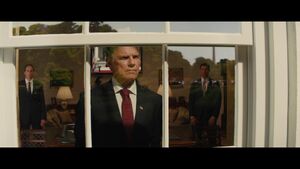 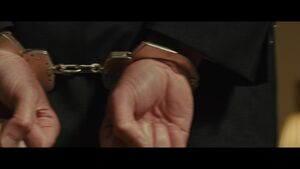 The President being impeached.