Weapons proficiency (some members are from military backgrounds)

The Professionals are a crime syndicate in Grand Theft Auto Online. It is managed by a mysterious person only known as The Boss.

They are a professional group of criminals that deal in drug trafficking and arms smuggling. They operate all throughout San Andreas and are are in control of many different fronts, being in several missions where the player must take out waves of them. The Professionals always drive all-black or all-gray vehicles.

They appear to be a drug-distribution network, dealing with various gangs throughout San Andreas such as Ballas, The Lost and Los Santos Vagos. They also seem to be affiliated with the FIB too. They are also in control of many different fronts including the Mile High Club construction site.

The group of criminals also seem to be providing courier and bodyguard services for a variety of valuable employers, thus making them potential rival competitors for Merryweather. Professional Members also appear to be ex-U.S. Marines as Lester describes them as "ex-military units" (some Professionals members are spotted shouting military jargon such as "Semper Fi!"; motto of USMC). This makes them even more similar to Merryweather, as Merryweather operatives consist of former servicemen as well.

In spite of being enemies of the GTA Online Protagonist, they can be hired and become playable. 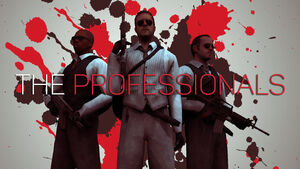 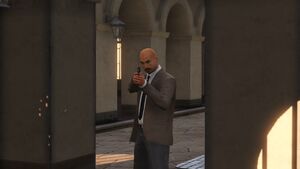 A Professionals member
Add a photo to this gallery

Retrieved from "https://villains.fandom.com/wiki/The_Professionals?oldid=3527962"
Community content is available under CC-BY-SA unless otherwise noted.