Villains Wiki
Register
Don't have an account?
Sign In
Advertisement
in: Status Dependent upon Player Choice, Mutated, Monsters,
and 25 more

Kill anyone whom he sees (temporarily succeeded).

He was voiced by the game's creator, theMeatly.

Norman Polk was one of the projectionists at Joey Drew Studios, mainly keeping to himself and working in the dark, behind the scenes jobs. Over time, Polk began to notice strange behaviors from Joey Drew and Sammy Lawrence, but did not concern himself too much with them.

It is currently unknown why he became trapped in the studio, but at some point after his imprisonment, Norman was corrupted by the ink from the Ink Machine and turned into the humanoid monster that is known as the Projectionist.

While Boris is searching around the dark studio, he can sometimes enter areas covered in lots of ink. In that levels, the Projectionist lurks around instead of Ink Bendy. Although his speed is equal to that of Ink Bendy, The Projectionist is easier to escape, as he can see Boris only when he is in front of his face. When Boris defeats him, Norman can be encountered in normal levels. Boris can also enter the Projectionist's special level by touching the heart in his safehouse.

Henry can listen to audio logs from Norman throughout the level, including the one he made discussing Drew and Lawrence's behaviors. His recordings give hint to one of the puzzles in the level.

Norman, now corrupted and turned into the Projectionist, is seen on level 11 walking around. He wanders away, then shuts the door behind him.

Later, he is encountered patrolling level 14, where Henry must enter to collect inky hearts for Alice. Henry must navigate through a small wooden maze where the Projectionist is sulking, avoiding getting into his projection beam and being seen. If seen, the Projectionist will chase down and attempt to kill Henry. However, the maze can be completed by not being seen.

The Projectionist returns in Chapter 4 regardless if Henry killed him in Chapter 3 or not, once again as an enemy trying to kill Henry, roaming the flooded maintenance department of Bendy Hall. When Henry pulls the lever to unblock the stairs to the room above, the Projectionist notices Henry's presence and chases after him until Henry pulls the lever in which the Projectionist hides out of sight to give Henry a false sense of security, only to catch Henry off guard and chase him as he is making his exit, he then manages to corner Henry in a Little Miracle Station. Just before he could kill Henry, Ink Bendy intervenes. The two monsters trade blows with each other but ultimately, Ink Bendy overpowers the Projectionist, strangling and decapitating him, killing him for good. Ink Bendy takes away the Projectionist's body, leaving behind his projector head.

When he was still Norman Polk, the man who would become the Projectionist was mysterious and quiet, mainly keeping to himself and staying out of everyone's way. He was mainly drawn to dark places, and was considered creepy by the other employees, even though he was one of the most sane and clever ones there.

After his transformation, the Projectionist became a mute, wrathful brute that does not seem to be aware of reality, killing many ink creatures for no specific reason, even ripping them off, good examples are lifeless Butcher gang members in level 14.

Dreams Come to Life, the Bendy novel, reveals Norman was aware of everything that was happening in the studio. He also was aware of Buddy releasing Bendy and was an all around friendly if distant guy. He also had a weird sense of humor.

The Projectionist is a very tall, black, inky humanoid figure with thin limbs. He has a working projector either over his head or as his head, which produces a constant light that he uses for vision. He also has reels of film and a small speaker on his chest and back. The Projectionist appears to be deaf, as he does not hear Henry wading through the pools of ink, even when he is right nearby. 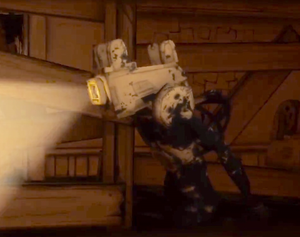 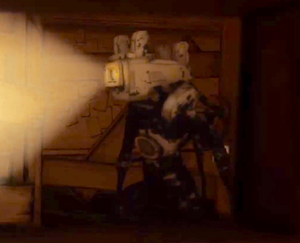 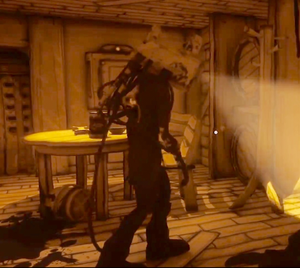 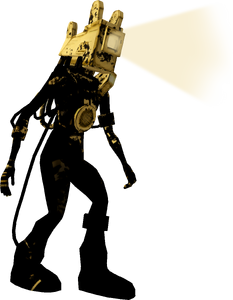 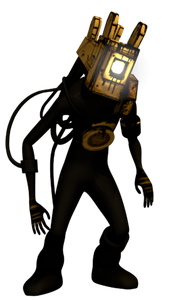 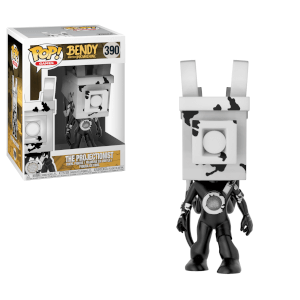