The Protagonist is the playable character in Spooky's Jump Scare Mansion, being the character the player controls.

We never really see the protagonist when we start the game. However, in the bad ending, we see a rather young person of an unknown gender with brown hair, red eyes, and carrying a bloody axe.

The Protagonist is a person who loves history and lives in a town near Spooky's Mansion, which was a mystery, one day they decided to go to Spooky's mansion to discover the mansion's backstory, even when the horrors seemed cute, they were always moving forward.

If The Protagonist hits any specimens that go beyond the counter of 20, they will end up becoming a specimen themselves.

The Protagonist dies in such a way so tragic enough that they become a ghost, and they join Spooky's army. 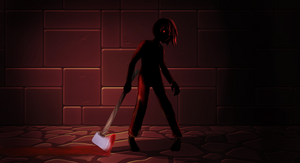 The Protagonist in the bad ending. 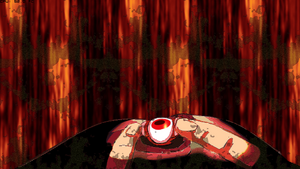 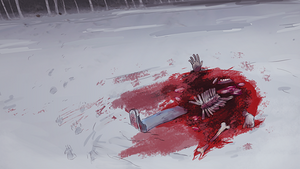 The Protagonist being killed by Unknown Specimen 4.
Add a photo to this gallery

Retrieved from "https://villains.fandom.com/wiki/The_Protagonist_(Spooky%27s_Jump_Scare_Mansion)?oldid=4049178"
Community content is available under CC-BY-SA unless otherwise noted.