Cause as much chaos as possible.

The Protagonist is the nameless character and the main protagonist of the song "Such Horrible Things" by the band Creature Feature.

Throughout the song, the character describes all the horrible stuff he has done in his life to the audience and admitting that although he deserves the most gruesome of deaths, he was happy with all of his crimes. During the chorus, he tries to admit that he is not a bad man despite his heinous acts, but changes his mind at the last second and fully admits that he really is as bad as people say. He is currently 18 years old, and in solitary confinement as he is narrating all of the crimes he has committed in his life. From the day he was born, he scorned his parents' name, and over the years would eventually drive them both insane and ruin their lives. He refers to his birth as a curse, though whether or not he meant this literally can be up to speculation.

The Protagonist was shown to be a horrible person since a very young, biting a nurse upon birth. When he became two, he poured super glue into his father's hair, forcing him to cut it all off. At the age of four, he stabbed a mailman's hand with a knife as he put mail through the door slot.

At the age of six, the Protagonist tricked his neighbor's son into playing hide and seek with him in the woods and making him "forever lost" in the forest, with heavily implications the child never got out. At the age of eight, he burnt his house to the ground simply because he hated its color.

At the age of ten, the Protagonist pretended to drown so he could scare the people who came to rescue him and laugh in their faces. Two years later, he pushed his sister down a well to boost his self-esteem, possibly killing her.

At the age of fourteen, the Protagonist claims "nothing much happened", before remembering "there was that one time". During 50 seconds without any lyrics, screams and car noises are heard in the background, implying some sort of car accident.

At the age of sixteen, the Protagonist committed his final crime by burying his brother alive because he found him dull. The brother managed to survive, and the Protagonist got put in solitary confinement for the rest of his life. Now eighteen, the Protagonist claims he still hates things, and now with no friends, phone or life to call his own, he laments he will die in this state. 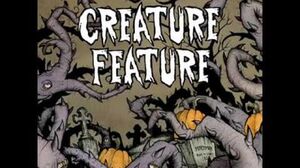 Creature Feature - Such Horrible Things
Add a photo to this gallery

Retrieved from "https://villains.fandom.com/wiki/The_Protagonist_(Such_Horrible_Things)?oldid=4338102"
Community content is available under CC-BY-SA unless otherwise noted.