Ruler of The Castle

The Queen (in Japanese: クイーン Kuīn) is a malicious monarch who is the ruler of the Castle, and the main antagonist of the 2001 PlayStation 2 videogame Ico. Because of her old age and failing body, she intends to cheat death by using her daughter, the mysterious but kind-hearted princess Yorda, as a spiritual vessel. Her plan goes awry when Ico (the game's titular protagonist, and last component of the sacrifice required for the ritual) escapes, frees Yorda, and sets off to find a way out of the castle.

She was voiced by Misa Watanabe.

The Queen is an ancient being who has existed for an undetermined period of time. In the game's pre-history, she curses Ico's village, deceiving them into sending any horned children of theirs to die in her castle tombs, believing that this sacrifice will protect the rest of their village. The queen takes the souls of the children sacrificed in this manner, transforming them and using them as her servants within the castle.

It is implied that she created her daughter Yorda with her own magic and treats her cruelly. Trapping her in a small cage (Considered a form of torture) and emotionally abusing and neglecting her until Yorda's will to resist or leave has been broken completely.

The Queen herself appears only a few times throughout the game, relying instead on her minions, the ghosts of Ico's predecessors, horned boys who were sacrificed in the past. Ico cannot kill them, but manages to thwart them every time, sending them back to their caskets. The Queen herself makes three appearances throughout the game: the first time she introduces herself with a revelation that Yorda is her daughter and a warning, shutting the gates leading to the mainland. By the second time, Ico has managed to unlock the gates, but halfway across the bridge, the Queen intervenes, turning Yorda into stone and causing Ico to fall to his apparent death. But Ico survives and works his way towards her.

After Ico has finally slain the Queen's minions by use of a new, more powerful sword, he confronts her in her throne room. Queen tells Ico her plan with Yorda but is not interested in Ico so she tells Ico to leave in exchange of sparing his life. Ico would not have it and battles with her. This is the Queen's lengthiest appearance and her second spoken appearance, for once engaging in dialogue with Ico (finally exposing and detailing much of the story's plot). The two fight each other and Ico manages to slay her by wearing off her force field and impaling her with his sword. Near death, the Queen warns Ico that Yorda will never escape the castle before she finally dies in a powerful blast which flings Ico to the far side of the room and sets off the destruction of the castle, although Ico and Yorda are able to escape.

The Queen is a seemingly beautiful woman in a long black dress who said to be old and aging, nearing death. She is physically imposing, towering well over Ico and Yorda. Her body including her hair along with her spiked crown, is shaped by shadows and dark fumes, which also form her garments. She is all black but for her face and chest area, which are snow white. She is able to speak both her daughter's runic language and Ico's.

The Queen has a number of powers, beginning with her ability to use other bodies (as she intends to use Yorda's) as "spirit vessels". In cutscenes, she is shown to be able to materialize out of thin air. She has the ability to command the creatures chasing after Ico and Yorda, which also materialize out of portals from time to time. Should Yorda be dragged into one of these portals, an expanding wave of dark matter would instantly turn Ico into stone. This is the same power with which the Queen turns her daughter into a statue later on, and her one attack against Ico during the final battle. It is here that she also dons a force field, which Ico must disable before finally being able to kill her.

It is likely that the Queen's powers are in some way connected to the castle, as her demise brings about the destruction of the island. 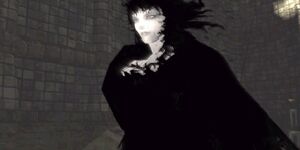 The Queen
Add a photo to this gallery

Retrieved from "https://villains.fandom.com/wiki/The_Queen_(Ico)?oldid=3840552"
Community content is available under CC-BY-SA unless otherwise noted.