Spreading the Infection across the Hallownest.

Destroy Hallownest through the Infection and restore it to previous rule (failed).

The Radiance is the main antagonist and true final boss of the 2017 indie videogame Hollow Knight.

A powerful and destructive entity, the Radiance is the being responsible for ruling the Moth tribe before the creation of Hallownest, while also the one responsible for causing the Infection as punishment for the bugs abandoning her laws. Using the Infection as a weapon of mass destruction, she seeks to destroy all wisdom of Hallownest until there is no competition in her rule.

The Radiance is implied in the past to have once been the benevolent ruler of Hallownest. She was connected to her creation the Moth tribe via dream essence. Since the Pale King came along and gave the moths free will, the moths forgot the Radiance and worshiped the Pale King instead. This made her extremely envious as she felt unloved.

Consumed by grief that her people stopped worshipping her, she used her powers as a higher being to create the Infection. A powerful plague that would invade the dreams of a bug, the Infection would leave orange spots growing on her victims, as well as orange eyes. Due to how dangerous she was, the Pale King, another higher being, feared her to the point where he had to convince three people (named Dreamers) to seal a vessel born of void and the Pale King's light within the vessel. The vessel would be known as the Hollow Knight.

However, the Radiance was still wrathful and persistent, yet she still had her intelligence. As the Hollow Knight grew old, its strength diminished and she used her power to seep the infection from out of its body. Despite the Pale King having disappeared, the Radiance decided to bring the infection tenfold to Hallownest, infecting most of the enemies and bosses the Knight encounters in the game.

At the end of the day, the Radiance is nothing more than a heartless, envious monster. However, as she uses her power to infect anyone she can. Including those who have never wronged her or "forgotten her". She uses her power to bring suffering to all, regardless of who they are. So while the Radiance may have been tragic, her tragedy no longer holds up.

At one point in the past, a Higher Being created a race of highly intelligent moths. The moths came to worship the being, referring to her as "The Radiance". But later, a new Higher Being known as the Pale Wyrm arrived and created a kingdom called Hallownest. Most of the Moths willingly forsook their creator and followed the Pale Wyrm instead, though some continued to worship the Radiance in secret. The Wyrm used his power to grant most bugs intelligence and allowed all of his followers to live in peace. Once the kingdom of Hallownest was formed, the Wyrm transformed into the being now known as the Pale King. During his reign, the Pale King discovered the Void which resided deep in the Abyss. He used the Void to create many different constructs, initially creating mindless but loyal drone-like beings to act as guards in his palace.

Upon realizing that all of her followers had turned against her, the Radiance grew to an extreme wrath and punished the "traitors" by entering their dreams and drained all of their memories away until their minds were nothing but burning, raging light. While most are killed by this process, the rest are turned into zombie-like entities, starting a disease known as "The Infection". When infected, the bugs' memories are reverted back to their original primal hive mind instincts, but due to the Radiance's malevolent influences, they grew hostile and slaughtered everything in their path.

As a means to save his endangered kingdom, the Pale King attempted to find a solution and eventually had the idea of Vessels, undead beings made of Void that intended to be so empty that they could completely contain the Radiance's power, though almost all resulted in failures as they were not completely hollow. The Pale King discarded thousands of Vessels back into the Abyss for they were not hollow enough. Eventually, one Vessel ultimately succeeded in sealing the Radiance inside its body and took shelter in a giant cocoon referred to as the Black Egg, earning the title "The Hollow Knight". Once the Hollow Knight was sealed inside the egg, three intelligent bugs volunteered to become Dreamers by sealing the entrance to the egg to prevent the egg from being opened prematurely, maintained by the Dreamers' eternal sleep. The presumed last surviving Vessel, the Knight (the playable main character), left Hallownest as their primary purpose was already fulfilled. The Pale King and his White Palace mysteriously vanished while Hallownest recovers from the Infection, seemingly gone for good.

Depending on the Knight's progress through the game, three different endings can occur. The Radiance herself only appears at the end of the third ending. However, due to the Hollow Knight being the Vessel imprisoning her, she plays a major unseen role in all three. In the other two endings, the Knight absorbs the Dreamers into themself to gain access to the Black Egg, where inside they battle and defeat the Hollow Knight, becoming the new Vessel to seal the Infection. In one of the two other endings, Hornet is incidentally sealed in the Black Egg as well, inadvertently becoming a Dreamer to her own imprisonment; with her unreachable, the Infection can never be stopped if it ever comes back.

The Radiance herself only appears during the third ending "Dream No More". In order to obtain this ending, the Knight must not only absorb the three Dreamers, but also collect the two parts of the Kingsoul charm by awakening their Dream Nail with enough dream essence to collect one piece from the White Palace (which is now sealed away in the dream realm and can only be accessed by the awakened dream nail) and collect the Shade Cloak from the Abyss in order to bypass the Abyss Gate in the Queen's Gardens, defeat the Traitor Lord and find the White Lady, who has the other piece of the Kingsoul. The Knight must then bring the Kingsoul to the Abyss where it will become the Void Heart.

The Radiance serves as the final boss of the mode, in her true and primal form: Absolute Radiance. As Absolute Radiance, she appears as the final opponent of the Pantheon of Hallownest. Immediately after defeating the Pure Vessel, the Knight is suddenly warped to the top of the Godhome realm, where Absolute Radiance resides. The only difference to her appearance is a larger halo of light emitting from her. The battle against her is similar to the regular Radiance, although all of her attacks and spells are cast at a faster pace. Also, the final phase is altered, where she now warps across the room and summons orbs of light before the Knight can deal the final blow.

When defeated, none of the Vessels or the Hollow Knight aid the Knight in finishing off Absolute Radiance. Instead, the Knight transforms into a massive monster made of Void called "Void Given Focus", which grabs Absolute Radiance and effortlessly kills her by slashing at her repetitively with their claws, causing her to shatter into thousands of dream essence. Void then leaks out of the Godseeker in the Junk Pit. The scene ends without showing what happens next. If the Delicate Flower was given to the Godseeker prior to this, the Void and the Godseeker are all absorbed the flower.

In the Hall of Gods, defeating Absolute Radiance causes her to simply burst into dream essence.

The Radiance resembles a white moth with multiple gray tentacles by her side that act as wings. She has yellow glowing eyes and three spear-like spikes atop her head resembling a crown. Her legs appear to be made up of two appendages. Her insides appear to be made of pure dream essence, as a number of said essence can be seen pouring out of her eyes when the Hollow Knight tears it open, allowing the Knight access to her weak spot. 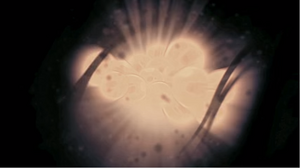 The Radiance releasing the Infection from the Hollow Knight. 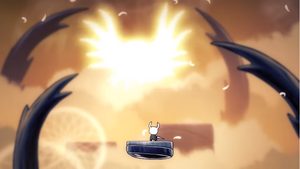 The Knight engaging the light. 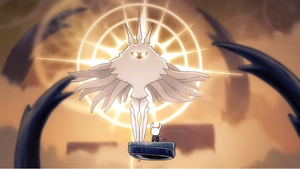 The Radiance revealing herself from the Dream Realm. 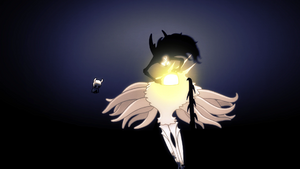 The Shades of the Hollow Knight and the Knight deal the finishing blows. 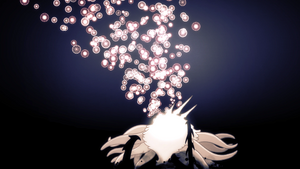 The Radiance dragged into the Void, ending the Infection for good. 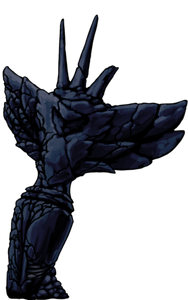 The statue of the Radiance found at Hallownest's Crown. 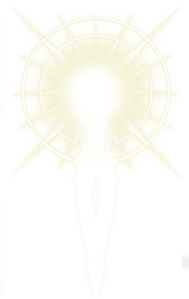 The statue of Absolute Radiance in the Hall of Gods. 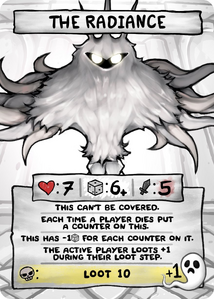 The Radiance's monster card in The Binding of Isaac: Four Souls. 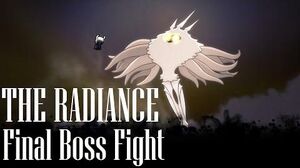 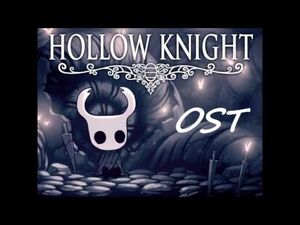 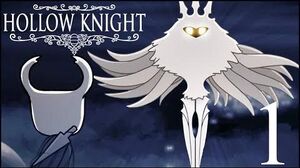 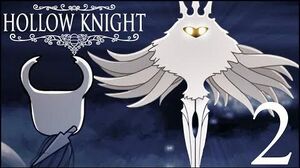