Kill humans who intrude its colony.

The Raven is a Xenomorph of an unknown breed and the secondary antagonist of the 2013 video game, Aliens: Colonial Marines.

The Raven was first encountered by Corporal Winter in Hadley's Hope when he was about to regroup with his fellow marines. The Raven ambushed and knocked Winter unconscious. It then brought him back to its "lair".

Winter eventually regained consciousness, only to find that he is glued to the wall by the same resinous material as used in xenomorph impregnation. The Raven appears, approaches Winter, and then suddenly leaves. Winter takes advantage of the opportunity and managed to break himself free. Unfortunately, the Raven returned shortly after and began to hunt down Winter. With no way to defend himself (as he is stripped of all his equipment), Winter was forced to retreat further into the sewers to escape the Raven. Just as Winter is almost out of the sewers to meet up with his fellow marine, O'Neal, the Raven pursues them. However, they manage to escape back out to the open.

Battle against Winter and Demise

After reuniting with fellow marines Bella and Reid and attempting to hack the communications array, the Raven suddenly bursts through some nearby containers, forcing the group to separate. Shortly thereafter the team regroups back in a large cargo room. After O'Neal is rescued from the Xenomorphs, the Raven returns as the group make their escape. Unfortunately the Raven corners them forcing Winter to use a power loader to fight back while Bella, Reid, and O'Neal provide covering fire. After a tense battle, Winter manages to use the loader's arm to break its neck, instantly killing it. The group then returns back to Operations.

The Raven resembles an ordinary bipedal Xenomorph, but larger, almost entirely encased in a bullet-proof, chitin carapace, and only walks with its large hind legs - like a Queen. Its tail has a distinct ridge of spines at the base of its harpoon-like blade. Its head possesses a ridged carapace, much like a Warrior, with a line of spikes along the top of its cranium. The Raven's face is scarred, exposing evidence of human features beneath the skin, including eye sockets, a nasal cavity and jaws and teeth that are significantly more human in appearance than on most other Xenomorphs; the teeth themselves are not silver and metallic as on most Xenomorph variants. This strain of Xenomorph also lacks the large canine teeth of Praetorians and Queens , making its teeth blunt and noticably more human-like - with two small tusk-like protrusions either side of its lower jaw. The Raven is very large, even for a Xenomorph, with a height comparable to that of a Praetorian or even a Queen.

Unlike most Xenomorph castes, which produce screeching and hissing vocalizations, the Raven can produce an extremely loud, deep roar which can be heard across long distances. The Raven can also be heard making a "snarl" noise characteristic to Lurkers at times, further hinting that Lurkers may be a leadership caste. 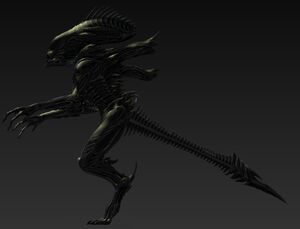 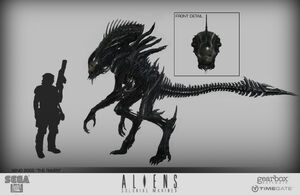 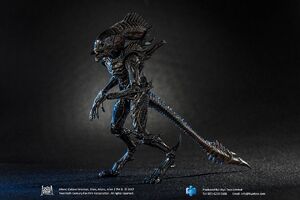 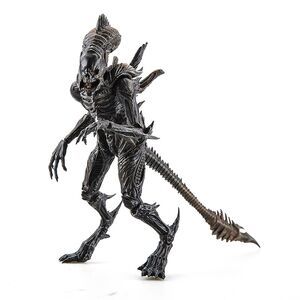 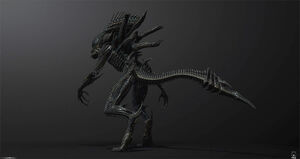 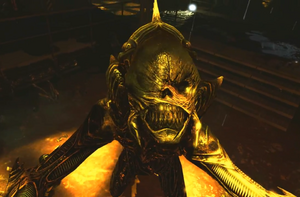