NOTE: This article is only about The Resistance's villainous acts.

The Resistance are a mysterios group that claim to be fighting for the peasants and opposing the Guards. In the game and stages, they act as a hero. However, as well as, they act as the villain in the first, second and final stages.

In the first stage, they attempted to kill Dan and they kidnapped the Princess and imprisoned her in a castle.

In the second stage, they attempted to murder Dan and Josie. They shot at them with AK-47s and RPGs and they flew with jetpack.

In the fifth stage, they act a heroic role. They attacked to the guards and they rescued the dragon.

In the most part of the eighth stage and game, they act a heroic role. But in the end of the game, a resistance member becomes a villain with killing geezers and Josie/Dan. Later, the rest of the Resistance becomes villain with them and attempted to kill player.

Robots are the bosses that created by them. There are two robots that appeared. 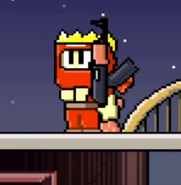 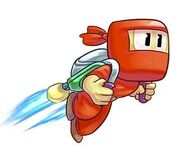 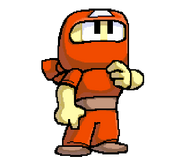 Retrieved from "https://villains.fandom.com/wiki/The_Resistance?oldid=3191126"
Community content is available under CC-BY-SA unless otherwise noted.