Xenophobic Terrorists
The Right are a high-tech group of anti-mutant fanatics from the Marvel universe who were founded by Cameron Hodge. They made their debut in X-Factor. The Right are amongst the most outright murderous of the anti-mutant groups and seeks one thing: the death of all mutants. They undertake their task with the zeal of madmen and wish to purge the world of the "mutant menace" - utilizing a level of violence that clearly makes them the oppressors, yet they are too absorbed with their own violent prejudices to pause and contemplate.

The Right is an anti-mutant militia created by Cameron Hodge. Hodge was a roommate of Warren Worthington III (aka Archangel) in college who had grown insanely jealous of Worthington's good looks, prestige, and wealth. When Hodge learned Worthington was the mutant Archangel, all his hateful feelings attributed to Worthington were transferred to include all mutants, whom Hodge came to believe were a threat to the freedom of normal humans and therefore should be destroyed. After his graduation from college Hodge became a highly successful member of a leading New York advertising agency, and during this time, he secretly created an organization devoted to the destruction of all mutants, The Right. Hodge was the leader of the group and was known as The Commander.

The first physical act of violence The Right committed was the kidnapping of the young mutant known as Rictor from his native Mexico, where he was responsible for a devastating earthquake. The Right brought him to San Francisco, where they hooked him up to an elaborate device that would amplify his powers. Their plan was to force Rictor to cause an earthquake at the San Andreas fault, damaging California. The Right believed that when the public finds out that a mutant had caused all the destruction that it would further discredit mutants in the eyes of the public, but X-Factor foiled their scheme and rescued Rictor.

Hodge contacted a genetic engineer, Dr. Frederick Animus, who would later be known as the Ani-Mator, and commissioned him to find a way to prevent mutations from occurring. Instead, Animus defied his employer's orders and created creatures with hybrid creations of humans and animals, which he called his "Ani-Mates." The Right had arrived on the scene to discipline the defiant Animus, and ended up battling the Ani-Mates, led by their member Bird-Brain and his allies, a group of young teens called the New Mutants. In the ensuing combat, the New Mutant called Cypher was killed. Infuriated, another New Mutant, Magik, transported all of The Right to the dimension of Limbo. Hodge narrowly escaped that fate and because of this incident, rededicated the cause of The Right to destroy mutants, no longer content with suppressing or discrediting them.

When the Archangel's wings were damaged in a battle against The Marauders, Hodge secretly arranged to have the damaged wings amputated. Then, he convinced Warren Worthington to change his will, making Hodge as the executor of the estate. He arranged for Worthington’s seeming suicide, and Hodge controlled the Worthington fortune. By now, the other members of X-Factor had realized that Hodge was a threat to be reckoned with. They engaged The Right in a destructive battle and learned that Hodge was actually the leader of the group. Although he escaped to scheme and fight for another day, The Right were dealt a crippling blow and have yet to recover. 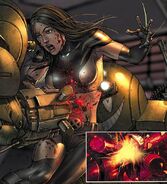 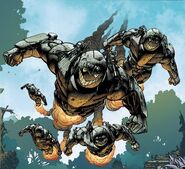 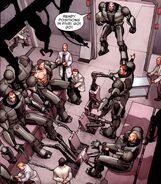 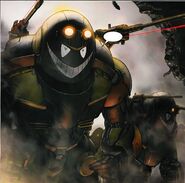