Kill and eat every living creatures it comes across.

The Ripper is the main antagonist of the 2008 natural horror film Pig Hunt.

Its vocal sound effects were provided by Mark Gingras.

Within the northern reaches of California, a legendary wild boar by the name of "the Ripper" is claimed to roam the forests. Said to be over 3,000 pounds, the gargantuan swine had no reservations on what it fed on. Both animals and humans fell by the many from its crushing jaws. However, the man-eating beast was captured by a group of secluded hippies. They worshiped the overly large boar as if a God, but that mattered not to the beast. It broke free of its captivity and reclaimed its territory in the woods. It began to slaughter anyone unfortunate to cross its path while the group dispatched the bravest hunter to recapture it.

During the hunt, a feud between a group of tourist hunters and a local family clan erupted. As bodies began to pileup, the hippies planned on using them all as sacrificial offerings to the tusked predator. When the swine was lured back to the area, two of the wounded hunters were devoured by it. When they tried offering another, the ceremony was cut short when John rescued her. The pig turned its attention on its handler and quickly slaughtered him before turning its gaze back on the other two.

However, John's knowledge on the animals proved useful as they remained still. Taking the beast's attention off of Brooks with the use of a pig call, he avoided its goring tusks and dove into the mud. As the near-blind boar loomed over him in search, he fired his crossbow directly into its lower jaw. He then shoved the arrow up with his hands, remarkably slaying the legendary wild boar. 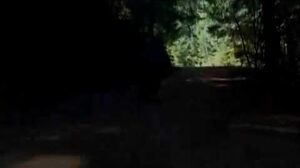 Pig Hunt (2008) - Trailer
Add a photo to this gallery
Retrieved from "https://villains.fandom.com/wiki/The_Ripper_(Pig_Hunt)?oldid=3892330"
Community content is available under CC-BY-SA unless otherwise noted.