NOTE: This article is about the incarnation of The Rival from the Arrowverse. The mainstream version can be found here: The Rival.

Testing his speed with other speedsters

Show the city that Kid Flash is not worth being seen as his rival.

Kill the Flash (both failed).

Edward Clariss, also known as the Rival, is the opening antagonist in Season 3 of the TV series The Flash.

He is a mysterious speedster and the archenemy of the Flashpoint timeline's Flash, Wally West. He has a considerably-different costume from his comic-book counterpart, having an all-black costume with an exposed mouth and an orange lightning bolt on his chest, also leaving orange streaks of lightning as he runs, in contrast to the Flash's yellow lightning.

He was portrayed by Todd Lasance.

After traveling through time and saving his mother's life, Barry now lives in the Flashpoint timeline he created by doing so. While approaching Iris West to ask her out, Barry sees a news station reporting that the Flash is right now battling his speedster enemy only known as the Rival, who attained his speedster powers through unknown means. While Barry heads to the scene to see the new Flash (Wally West) in action, Flash mistakes him for a civilian in need and attempts to save him, giving the Rival the time to escape. At his job at the CCPD, Barry is one of the policemen tasked with investigating the Rival.

A few days later, the Flash and the Rival are fighting again, in an abandoned office building. The Rival is able to defeat the Flash and throw him out of a window, but Barry is able to save him by moving his arms fast enough to create wind, which catches Wally.

Together with Kid Flash and a newly founded team, Barry locates the Rival at a sawmill in Central City. When Flash and Kid Flash arrive, the rival removes his mask and even gives them his name, claiming that rivals should know each others name. Neither Barry nor Wally, however, give them their name in return. Wally then starts attacking the Rival and throws him to the ground but the Rival grabs a metal pipe from the ground and impales Wally with it. Barry then engages the Rival. During the battle, Barry experiences memory loss which allows the Rival to create tornadoes with his speed. Barry is able to dismantle the tornadoes and smashes the Rival to the ground. Dazzled, the Rival acknowledges that Barry indeed is the fastest man alive but, once Barry has turned his back, attempts to kill him by vibing through his body. Before he can do so, he is shot by detective Joe West.

After Barry has dissolved the Flashpoint-timeline and returned to his former timeline, present-day Clariss is woken up by a mysterious voice. He looks around to see that the word "Alchemy" is being driven into his mirror.

While Clariss is taking a bus ride, he is once more called by Alchemy who is scratching his name into the window. Clariss, seemingly led by Alchemy, reaches a underground temple where many cloaked men are kneeling. One of them gets up and turns around, revealing himself as Doctor Alchemy. He tells Clariss, who is having flashbacks of his Flashpoint identity Rival, that there is a way to get Clariss his speed back, asking him if he wants that. Clariss replies that he would indeed want that very much. Alchemy indeed succeeds and Clariss gets his powers back. He speeds through Central City, thus alerting the Flash's team. When Barry approaches him, Edward reveals that he is aware that Barry tampered with the timeline and thus ruined his life. Edward reveals once more that he is the Flash's rival. The two battle each other through the entire city and eventually, Barry knocks down Clariss who, due his speed, crashes somewhere in Central City where Barry cannot find him.

The next day Barry tracks down Clariss but is attacked by Doctor Alchemy. After Alchemy has weakened Barry, Clariss grabs him and starts beating him up. He is about to be impaled by Clariss when Cisco uses his vibe powers to thrust him away. In combined efforts, Cisco and Barry defeat Clariss and knock him unconscious. Clariss is imprisoned but, in his prison, once more woken by Alchemy's voice. Alchemy claims that Clariss has failed him and Clariss begs for another chance. He is shown no mercy as the "Dark Lord" Savitar, the most-powerful speedster of all time, appears in the cell, grabbing Clariss and flinging him against the walls. Only Clariss could see him, as footage recovered from the cell by Julian Albert (Alchemy's civilian ego) shows that the entity that killed him was invisible to the cameras. 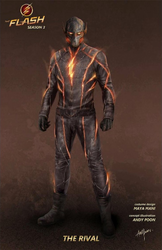 Concept art of the Rival.

The Rival without his mask.

Clariss being attacked and killed by Savitar.