Get his hands back from Fry (succeeded).
Get rid of Calculon (failed).

The Robot Devil (or Beelzebot as he is sometimes called) is a major antagonist in the animated comedy series Futurama created by Matt Groening. He spends his time tormenting robot sinners in Robot Hell. He is a professional fiddler who plays a solid gold fiddle, and is the lead singer and composer of Robot Hell's Band.

He was voiced by Dan Castellaneta, who also voiced Megavolt in Darkwing Duck, Evil Jim in Earthworm Jim, The Wickersham Brothers in Dr. Seuss' Horton Hears a Who!, Ventriloquist and Scarface in The Batman, and Itchy, Frankie the Squealer, Blue-Haired Lawyer, Count Dracula, and Louie in The Simpsons.

The Robot Devil first appeared in the episode "Hell Is Other Robots", where he torments Bender with up-tempo singing, dancing and deep-frying. When his friends, Fry and Leela, came to his rescue, he agreed to set free Bender if they could best him in a fiddle contest. The not-so-confident Leela simply bashed him over the head with his fiddle.

Later, in the episode, "The Devil's Hands Are Idle Playthings", Fry came back to Robot Hell to make a deal with The Robot Devil for him to have a pair of new hands to be a better holophoner player and win Leela's affection. Unfortunately, since The Robot Devil put his name on the "Wheel of Robots" to show good faith for the other robots, it was he who had to switch hands with Fry. However, since he tricked Leela's hand in marriage, Fry gave him back his hands if he called it off.

He later returned in the Futurama Direct-To-DVD Feature "The Beast With A Billion Backs" as a small cameo, and has been sighted throughout the series numerous times. He's also managed to be in a few plotlines of the Futurama Comic Books. He made his final appearance in "Calculon 2.0.", in which he made a deal with Calculon to return him to life and give him acting talent in return for leaving him alone; when Calculon dies once again and returns to Robot Hell as his old, talentless self, he torments the Robot Devil and all the other damned robots with his terrible acting, prompting him to scream, "Haven't they suffered enough?" 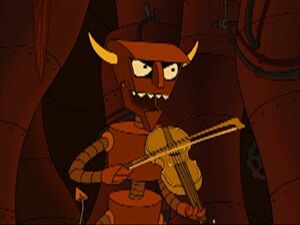 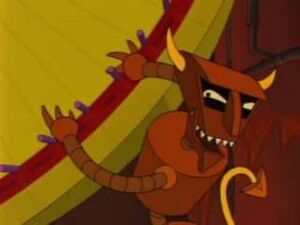 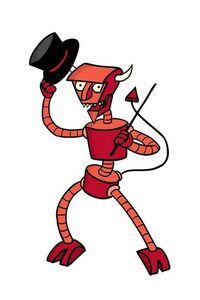