The Scallion Brothers
The Wisemen

On & Off Tricksters
The Scallions are recurring characters in the VeggieTales animated series. They either play biblical or original characters that are usually villainous roles, however they do not only play evil roles, others they either play as antagonists who don't wish to harm the heroes but are still not setting a good example, such as when they ran the Stuff Mart in Madame Blueberry, they kept on tempting her to buy more things that she didn't need, other roles however included more sinister goals such as when they played The Wisemen in The Book of Daniel story which in the show was called Daniel and the Lions' Den they became jealous of Daniel's popularity with their king, so they tricked the King into letting them throw him into the lion's den to be eaten by the lions. Occasionally, they play background characters and even minor protagonists such as in "Sweet Pea Beauty".

The purple nose and eyed scallion is the leader of the other two and most likely the oldest, he's usually the one to come up with their plans, he also plays quite a few roles in the show without the other two and has the most screen time.

The other tall scallion with the green eyelids and nose is believed to be the middle child, and has the least screen time of the other two, even though the leader usually comes up with their plans, Scallion #2 was actually the first one to suggest their plan to throw Daniel out of Babylon when he sayed "Or" in their villain song "Oh, No! What We Gonna Do?".

The short and stout scallion is the third and presumed youngest scallion. He has the second most screen time of the scallions as he played a solo role where he robbed two kids of their lunch money. 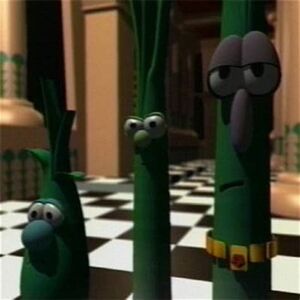 Retrieved from "https://villains.fandom.com/wiki/The_Scallions?oldid=3911749"
Community content is available under CC-BY-SA unless otherwise noted.