Member of the research scientists (false).

Fighting at the side of the Heroes (formerly).

Have the SFH cured an infected island.

Replace the original leader of Globex (both succeeded).
Have the world annihilated (failed).
Defeat the Heroes (ongoing).

In an island on an unknown ocean, while he is almost completing a formula, Globex broke into the facility and killed all scientists for creating a Toxin that escaped infects someone else. The Scientist armed himself and fought against Globex soldiers. Seconds later, a Strike Force soldier arrived who teamed up with the Scientist to defeat them. The Scientist explained a soldier about the Toxin that was supposed to be against the infantries. Instead, it would paralyze and shut down the brain, except the reptilian region where the Strike Force squad found the cure.

After the Strike Force fails to stop the train containing a nuclear missile, the Scientist informs the player that he is able to replace the nuke with cure.

At the epilogue, the Scientist talks to an unknown individual at phone and states he's glad he survived.

Back at where he was, Nathan informed the Scientist about Iagi's death and the Scientist told the SFH that they need to steel the informations in the clone factory.

Later, the Scientist sent the team into the space station and disable the clone signal with a virus.

Back at the factory, as the player fights soldiers and the leader piloting the mech, the Scientist managed to disable nukes.

At another epilogue, a voice coming from what appears to be a PDA or other touch screen device announces that the clone signal is online and the satellite is operational again. The Scientist removes his glasses, revealing his sinister red glowing eyes and smile as "the war is far from over".

The Scientist has betrayed the Heroes and took the role of the leader of Globex. He has brainwashed the captured Heroes and brought Dex back to life. He sends clones all over the world and says that he will succeed where his predecessor failed.

At the end, after sending the clones he thinks they are unstoppable and bred from perfect genes, bested by the Heroes who "have grown exceptionally quick", the Scientist thought his generals betrayed and pulled out the miniguns to kill them. He declares himself a direct infiltration at the SFH base. 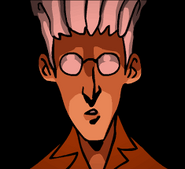 The Scientist's showing his true nature at the end of Strike Force Heroes 2.

Retrieved from "https://villains.fandom.com/wiki/The_Scientist_(Strike_Force_Heroes)?oldid=4215480"
Community content is available under CC-BY-SA unless otherwise noted.